I am beginning to think it takes the same amount of time to prep and complete these Halloween tutorial posts as it does to actually make the prop.  Feels like I have been typing for days and still have a number of props to get through from this year’s Haunted Trail of Tears event. If I can’t take the time to give thanks to those who gave me inspiration and give back to the haunt community, then I should just pack up my motors and find something else to spend all my free time on.  So, today’s featured decoration that made its debut on our Halloween trail this year is my dancing zombie.

Typical for first year props, there were some difficulties with this on the trail.  Due to an unforeseen design error, we had to turn this prop off about midway through the night.  I’ll explain more on that towards the end where I’ll give some recommendations on improving it for next year.  First off, I need to give a shout out to two haunters that helped inspire this project.  The first is SoulsOfTheForsaken.  He put up a tutorial on YouTube showing how they put their animated zombie together (link here).  This was the base for my idea.  Then thanks to another tutorial also put on YouTube, I was able to leverage a slightly different linkage system and still get the motion I wanted.  Again, thanks to Hawthorne Manor Haunted House for their rotating skeleton video (link here).

First task was to get the Hawthorn linkage working.  Rather than go through the huge amount of design and build hours it took to get to this point, here is the starting structure.  Note the use of the cross connectors  at the top.  I leveraged the bushings approach used in my other PVC animations to get a nice smooth circular motion on the cross bar.  The 3D printed bushings allow the smaller 3/4″ pipe to stay centered and move fluidly through the 1″ cross connectors.  Now just needed to connect a 1/2″ pipe at the center of the crossbar.  This provides a pivot point to move about while the vertical bar is rotated from the bottom in a circular direction thanks to the wiper motor at the base.  I did put a connector on the down pipe so I could easily get it on and off the wiper motor arm – you do not want a lot of play in that or it will slip off – a straight coupler would have been fine, but had the T connector laying around, so just used that.  Lastly, I put a 1″ pipe U structure above it with the intent of that keeping the cloths out the mechanism and kind of mimic shoulder structure. 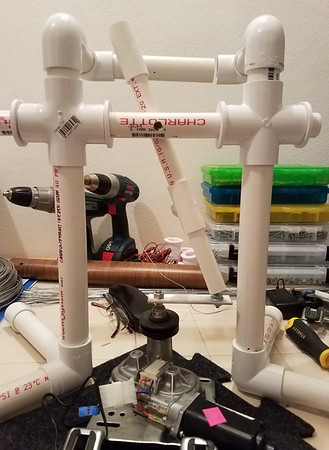 Hit the jump to read about how this new Haunted Trail prop came to be!

Okay, the animation mechanism was working the way I wanted it to.  Next started working on the upper body frame.  Basically used a less nimble version of my Posey frames for the torso.  Cut out my standard hip ellipse out of plexiglass to hold the wiper motor and provide the hip support for the zombie.  Affixed 4 flat bottom 1″ PVC end caps through the hip and into each other.  From there I laid out the wiper motor underneath the hips and marked the support holes for the motor – this is why I prefer to use plexiglass for the hip when motors are involved – to save money you could just use a wood scrap and then measure out the holes from the top.  Note, the wiper is offset from the center of the torso – further back and at a slight angle to the hip (up in the back and down in the front) – not a lot, but that helped keep the vertical bar on the motor arm as it swung out.  Play around with it a bit until you get the motion you like. 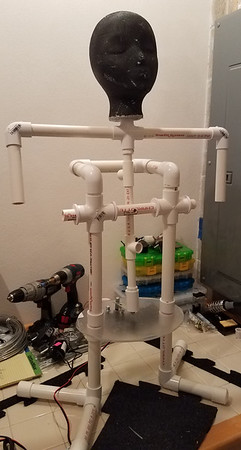 Add some quick arms just to get the feel for how it will move and then turn it on – oh, you will probably want a speed regulator otherwise it is going to go waaay to fast.  I bought 12-40V pulse width modulation units from Amazon (<$9) and inserted one between the power and the motor allowing me to set any speed I wanted.  Now, as the wiper turns, you get a nice smooth, but not  linear zombie like effect.

and another shot of the motor  arm in a different spot as it swings around.  Notice the nice range of motion yet the head stays straight due to the fixed point on the crossbar.

With that working the way I wanted, went ahead and finished up the neck, head and arm structures.  I wanted the arms to float unnatural like – after all it is a walking dead guy!  After some noodling came up with a design that would hold together under the clothes yet be free to sway from the irregular motion being delivered to the shoulders.  Simply used hooks and eye bolts screwed into PVC endcaps.  Slid some pool noodles to help flesh out the arms (just noticed I used green – how fitting).  They were now able to dangle and move easily yet wouldn’t come apart once the zombie was positioned on the trail.

Time to finish out the bottom half of the zombie.  Again, going with the fully articulated Posey design for the legs in case I wanted to put him in different positions – say like sitting on my lab table.  Went with thicker noodles for the legs again, giving a more realistic look. 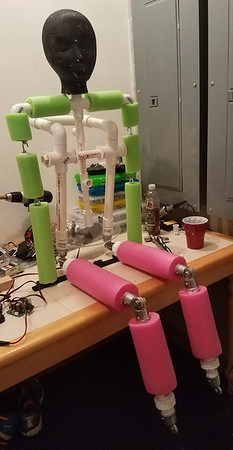 With the legs and feet on, I could finally stand it up freely and see how everything was going to come together.  This year I upgraded my Posey model to have more realistic chests.  Thanks to some fashion forms I bought on Amazon and a can of Great Stuff most of the Posey props looked like they hit the gym in the off season.  For this one, I cut a large slot at the top so the support bar could rotate through.  Also shaved a curve in the back to allow the motor linkage to rotate behind it.  Since the intent was to have the arms move, went ahead and just sliced off the shoulders on the foam mold.

Heheheh, by this point in the year, Linda was getting annoyed about all the Halloween props that were in various states in the basement.  I looked at it more as a theft deterrent.  Anyone breaking into our basement would likely freak when they shined their light on my babies.  Since everyone always asks – yes, all my Posey creations are big runners and that is why they all have the latest running shoes – maybe worn out on the bottoms from all my training, but perfect for my Halloween props – no reason to be wasteful and throwing things out when the have a perfectly good use one night a year.

So here it is with the chest plate and head on.  Looks a lot creepier now that is starting to take form. The torso frame was centered on the hips to give ample room for movement.  This meant less room for the chest piece.  To help compensate for that, the zombie had to get a chest reduction – these dead guys can’t feel anything so took a knife and just sliced it down the front.  Didn’t even need any painkiller.

Here is the shot from the back. You will notice I swapped out the 1″ PVC for the shoulder frame with a 3/4″ pipe.  It isn’t bearing any weight so no need to add the extra cost and weight.  You can also see where I carved out the back of the foam on the chest to give room for the motor arm to swing past.  This is when I should have been telling myself that I needed protection on the back side as well.

A quick note about the hands.  These came from the hand molds I made earlier in the year – there will be a post on that coming up.  They are supposed to be exact replicas of my hands but a weird (but awesome) side effect occurred when I put the skin tint in – the foam didn’t set up right.

In some cases it didn’t skin at all.  The great thing about Halloween prop building – every mistake is a gem in the making.  I didn’t get perfect versions of my hand, but I did get absolutely PERFECT zombie hands.  Drilled a hole through the arm pipe and the hand pipe and slapped some wire through allowing them to hang loosely.  We know have ourselves a complete zombie!

Okay, so here it is all dressed up for the night – unfortunately, (as eluded to earlier) we ran into some issues.  It was working great at the beginning doing the zombie dance as planned.  However, later in the night, my brother Ron noticed the clothes got wrapped up in the back of the prop.  I had taken care of that in the front thanks to the breast plate, but thought the shoulder structure would keep the clothes far enough away in the back – nope – the motor arm caught both the pants and the shirt on one of its rotations and proceeded to spin it tight against the motor shaft.  You can see the twisting effect in the shot below – even pulled one of the legs up.  It was so tight around there it couldn’t be freed without reversing the wires on the motor to get it to unravel itself.

I have it moved back into my basement lab again.  I just need a piece of curved plastic attached to the torso pipe to keep the shirt and pants away from the arm as it moves through.  Shouldn’t take me too long to make that quick addition and it will be all ready to scare the crap out of my guests next year.  Might even add some head rotations and LEDs to make it even spookier.

Did get a quick video to show the movement in case you are interested.

Hope you enjoyed reading about my new Halloween decoration.  Again, thanks to those fellow haunters who gave me my inspiration