Somewhere in the dark recesses of my mind lives a Halloween idea generator that quite frankly scares the crap out of me.  Not exactly sure how that haunted niche in the brain came to be, but it’s there.  For most the year I keep it suppressed, held in check by the willpower of goodness and strength of ever embracing decency.  I say “most of the year” because there is a time when shadows stand guard as unearthly creatures join in allegiance to break the chains of civility and let evil thoughts deliver punishing waves to my sanity.  This sinister rip in the fabric of time has a name and it is called October for it is here when the mind fills with devil spawn ideas such as this. 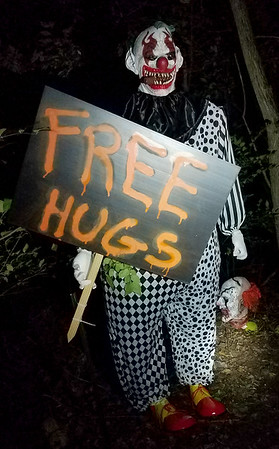 It is something about October training runs that bring up the most god awful concepts.  It may be the exhaustion brought on by the long race season or the long nights fretting about not having enough time to prepare for that year’s Haunted Trail of Tears.  I’ll be lost in my run, entranced by the sound of my shoes pounding the pavement and then it hits like a twitch right before you fall back on your chair.  An image will appear, clear, detailed and mortifying.  My reaction equally immediate, decisive and well, a bit disturbing.  “I have to reproduce that for next year’s haunted trail!!!”  And that sets forth a year’s worth of planning, material gathering and building.  You happen to be looking at the product from last year’s evil concept – and yes, it did make its debut last month on the Haunted Trail of Tears.  The following is a quick summary of how this all came to be.

Hit the jump to see how it all come together if you dare!

It started with a need to acquire a proper clown outfit.  It was an important element in the vision that this prop needed to be big and imposing.  Most of the clown costumes I have are smaller sized because they are cheaper.  This one needed to be at least 6 feet so it could look down on guests.  That led me to find this extra large clown costume on Amazon.  Off to a good start.

I really didn’t need the clown mask since I already had one from last year’s after Halloween sales.  The one I had was a full over the head mask where the one in this set wasn’t.  As creepy as that mask is, I will definitely find a use for it next year.  With the suit in hand, I was able to build out the frame to hold it.  The latest models for the Posies was slightly overkill for this use since the waist up was going to be rigid.  It may be useful to pose the legs in the future and thus opted to put the fully jointed legs on.  The goal was to make it as tall as possible, so this year I opted to keep the legs locked vertical so the joints ended up not being used – the couplers were still handy to make the product store efficiently (will cover at the end).  Cut out an oval from plexiglass as a hip structure – could have used wood, but the clear plastic allows me to easily cut wiper motor support holes if a decision is made to animate it next year.  Note, there are 4 1″ flat end caps bolted onto each other through the plexiglass to hold the leg and torso supports pipes.

Since it was stationary, just used two straight pipes to act as the torso frame.  A cross bar was added with connectors to hold the arms and a cross for the neck support.  To add to the creepiness, opted to make him top heavy.  Thanks to a 50 gallon trash bag, I was able to create a belly cavity.

Brought it from underneath the hips (cut holes for the leg pipes), tied if off at the shoulders and then proceeded to fill it with newspapers until it took the shape I wanted.  Then put the suit over it to help keep it in place.  A string was added to the midsection to cinch it a bit tighter so it had more of a beer belly look.

Next up arms.  There was a planned pose for this monstrosity which required manipulation of the arms.  Simply opted to put the latest Posey arm design on giving me full range of motion allowing freedom to put the arms in any position desired.  Added the pool noodles to flesh the appendages out a bit.

The full clown mask was filled with the expanding foam to make it a rigid head.  Highly recommend using Sika Pro Select Fence Post Mix to fill your masks.  One bag will fill two full size masks and it is a lot cheaper than specialty expanding foam you can buy from SmoothOn etc.  Make sure you close up all eyes, ears, nose and mouth holes before you pour in the foam.  Also do it outside – that stuff is a bit unpredictable since you are guessing the ratio (to help on this simply cut the volume in half to keep the same ratio) and if you guess too much it is going to spill over – that stuff isn’t going to clean up if it lands on anything nice.

As with my other filled heads, I inserted a piece of PVC in the head as a neck support and tubes in the eyes so I could insert LEDs and feed the wires out the bottom of the head.  Two leads in parallel connected to 4 AA batteries and you end up with this.

With the body fully dressed now I could stand it up and add the head to the cross connector in the shoulders.  Note, I used my standard Posey running shoes until I could get to Spirit to pick up some floppy clown shoes. 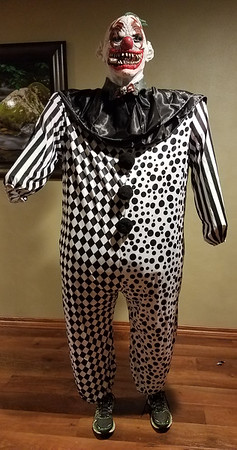 Hard to get a feel for how tall this creature is until you put it up against someone – I’m 5’9″ and some change and it was towering over me.  So far, perfectly aligned to my running vision a year ago. 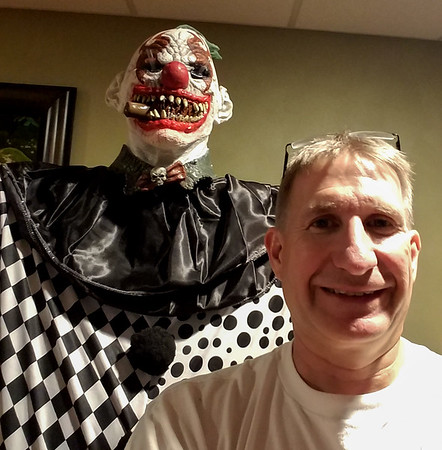 Finally got to Spirit and picked up a $14 pair of clown shoes (used a 20% coupon to bring the cost down a bit more).  Shame they didn’t come in black and white shoes – no worries, it will just add to the creepiness.  Threw in some PVC piping for support and attachment points – sprayed in some Great Stuff to keep everything in place. 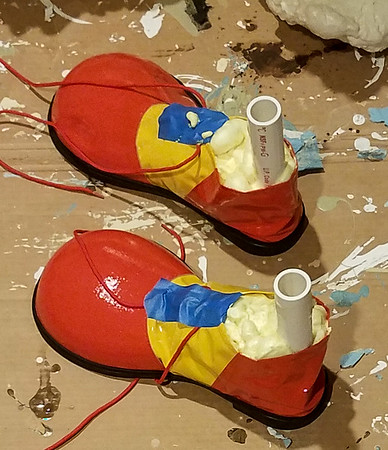 Trimmed up the ankle supports pipes and added the Posey chain link post joint so they could be attached to the legs keeping full mobility if they needed to be adjusted to give a solid stance.

Okay, slightly ahead of my prop order posts, so I am going to gloss over this part a bit.  The hands were constructed from molds of my own hands.  I’ll be going into detail on what was involved there, but I can now make exact replicas of my hands in rigid or soft foam.  These molds can then be inserted into gloves to give a realistic look. 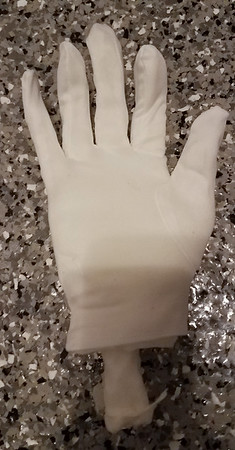 Add some armature wire on the back of the hand between the foam hand and the gloves allows me to put he hands in any pose I want.

You cannot see the wire in the dark as well as you can in this picture.   A small price to pay for being able to do this hehehehe (Yeah, I opted to go with the more socially acceptable pose for this post).

My nightmare now had a body, a head and now hands – shaping up nicely.

The day of the event, we hauled it all out into the woods for staging.  Oh, almost forgot.  Our evil clown needed a sign (again, per the vision) that was warm, friendly and welcoming.  Grabbed a piece of sign board and some spray paint.  Amazing how hard it is to make something sloppy when you want it to be.  I had to force myself to slow the nozzle movement so it would pool the paint – wanted it to run when it was lifted up.  Once that was dry, came back and laid a coat of glow in the dark paint over the letters – it is dark on the trail and thought it would stick out more if it glowed a bit.  That paint ended up being a waste of money – didn’t work AT ALL.  Brother ended up putting a small spotlight on it anyway so it had plenty of light.  The sign was attached with velcro to the stake so it would store easier. 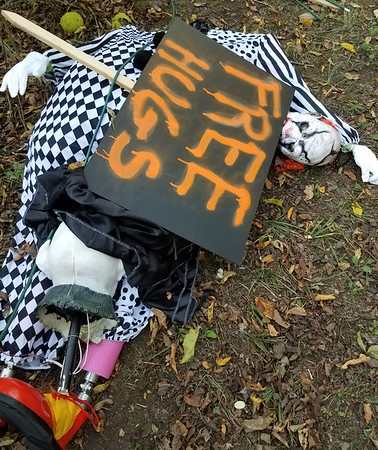 Time to get this thing ready for our victims… I mean guests.  Did I mention my vision had the clown holding a severed head?  No, sorry about that, my evil clown vision was holding a severed head in one hand and the free hugs sign in the other.  I told you these come from a very dark place. 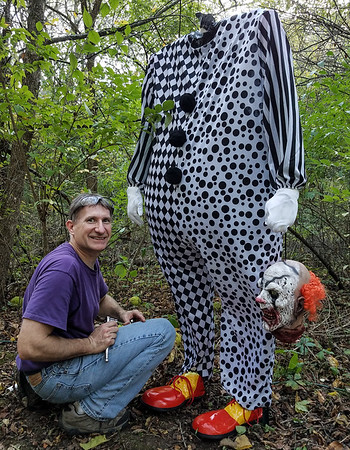 … and now the final product.

I had to laugh as we were tearing down the trail.  We forgot to turn on the green LEDs in the eyes.  Oh well, the creep factor was through the roof already and we received a lot of positive feedback on the prop.  Wait until they see the eyes turned on next year.  Ron told me everyone was taking selfies with it the night of the party.  That truly makes all the hard work worth it.

As with all my props, storage is a primary design consideration.  Thanks to the Posey structure and the newspaper torso, the Evil Free Hugs Clown collapses down to essentially nothing.  This is why the added cost of the friction couplers are worth it.  No need to find the socket wrenches to take it apart.  Simply untwist the couplers and it breaks down instantly. 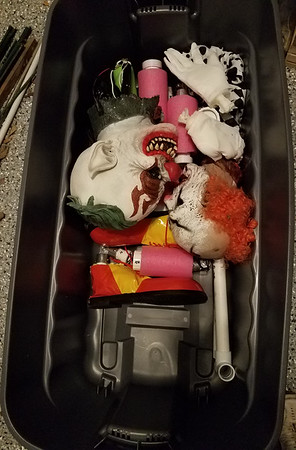 Well, that’s it folks.  The progression from dark vision to prop for the haunted trail.  Hope you enjoyed reading on how this all comes together.  On a side note, I was thinking about a crowd funding project to get me some badly needed therapy.