It has been a while since I’ve been nearing the end of the month and I still had an open slot in the blog quota.  Luckily I still have plenty of fodder to pull from.  Probably need to start considering processing more images from the backlog.  My Texas queue is starting to run thin (imagine that).  In the meantime, thought I would continue to show consideration for the non-birders out there and follow up my last running post with the companion piece.  As mentioned in that last post, the Illinois Marathon has options for a two run event – the Friday night 5K (from last post) and the following Saturday morning run.  You can choose your poison on the second run.  I tackled the full marathon a few years back (felt that one for sure), but they have a 10K and a half to round out the options.  My poison this year was the I-Challenge Half. 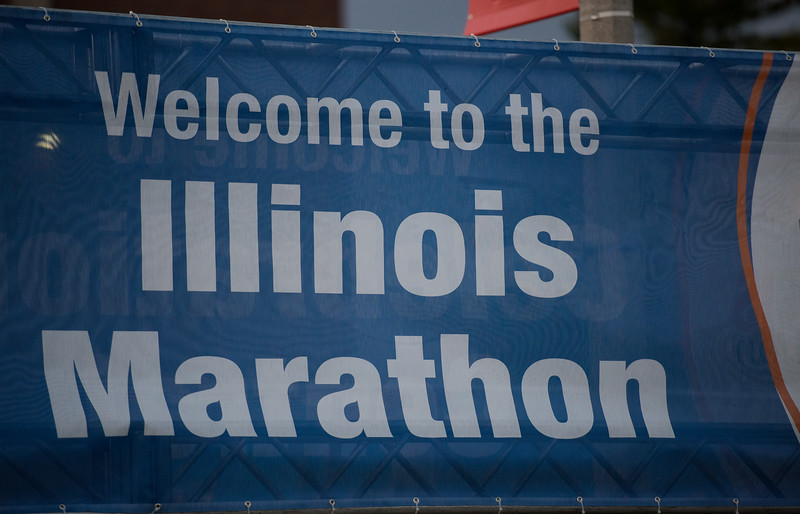 This year, the race coordinators introduced the long sleeve tech shirt.  Definitely more appropriate seeing as how this race is always wet and cold.  Not sure I am a fan of the logo or the color this year, however, the medals are OUTSTANDING.    Not only are they solid/heavy, they are always very artistic.  Think this was the 10th anniversary of this race. 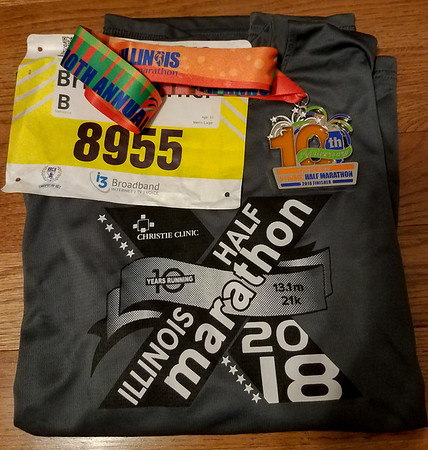 Hit the jump to get the highlights of the event.

The night before, the racing conditions were absolutely perfect.  This morning was more like a traditional Illinois Marathon – much colder in the high 30’s.  Was not expecting that based on a preliminary look at the forecast while packing.  That look prompted a switch from my warmer clothes to my mid clothes leaving me scrambling for race options Saturday morning.  Broke my motto – never trust a weatherperson.  After a long deliberation, opted for a two stage approach.  Start stage was bundled up like a polar bear hanging on to the last 6×6 chunk of ice in the entire Antarctic.

This somewhat got me through the corral phase of the race.  Standing in one spot for 40 minutes in the cold will make your bones ache.  The extra layering helped a bit on that front and based on the summer clothed people suffering around me .. a wise move.  A few minutes before the start, stage 1 clothing was ditched for a cooler choice.  Next time I will even go lighter.  By the end of the race was starting to overheat as the sun came up  and started warming the pavement 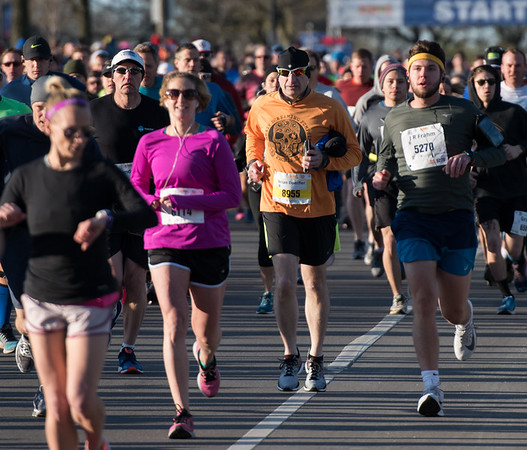 Of course, the two stage option was really thanks to having my personal photographer on the course.  Linda was in her usual start of the race position to get the traditional “happy” pictures … before the suffering sets in ha.  This allowed me to discard my stage 1 clothes.  Hope you were not thinking I carried those to the end. Better to be hot than restrict my arm movement if that was the case.  See, happy me.

As half marathons go, this one was not too bad.  Felt pretty good through to the park walkway.  Nice not to have to run that in the rain this year.  Interesting thing this year was the wide spacing of people.  Normally there is a natural banding of runners as the various paces result in clustering.  This year, there were much smaller clumps which made it feel like a much smaller race in total.  There are a lot of runners that participate in the Illinois Marathon, yet it didn’t feel cramped once you broke out of the corral groupings at the start.  I was lucky enough to have a few rabbits ahead of me that had very nice steady gates that allowed me to spend less time fretting on how I was doing.  Note, one of those rabbits was a lady I eventually termed the Energizer Bunny because she was relentless.  No matter what I did she was always 50 paces ahead of me.  I’d speed up to try to cut the distance and it was like she sensed it and matched the increase.  Bring it back down for a quick rest and sure enough she must have decelerated as well.  Before you ask, she was not aware I was behind her – she was too busy smiling and waving to the onlookers as if she was out on a morning stroll (Bri apparently needs to train harder!)
See, suffering me.

Between mile 11 and 12 came upon someone I thought I recognized from home – in fact someone that was employed by the same company.  Pushed it a bit to get alongside and confirm – sure enough that was him – well, him in the physical sense, pretty sure he was on the dark side of the moon by that point spiritually.  Definitely suffering bad and digging deep to keep going.  Guessing went out too fast or a fuel issue.  I tried to give him some words of encouragement but doubt he even recognized who I was.  Did a quick assessment, decided he should have enough to get through the last mile or so and started ramping it up to my end of race kick.  At mile 12.5 was feeling really good about the race plan and decided to let the dogs loose.  Problem is I slightly misjudged the remaining distance – didn’t remember them cutting the course so sharp into Memorial Stadium.  Turns out it was probably closer to 12.75 – could have kicked it earlier and shaved off more time.  That includes at least the 17 seconds that I went over from the great run I had last year (link here).

All and all, pretty happy.  Could have managed the pace a bit better (mental note, start kicking earlier), but a year older and still coming in only 17 seconds off one of my better times.  Makes all of that off-season training worth it.  Oh, before I forget, wanted to give kudos to the race coordinators who provided everyone free race pictures this year.  Very nice perk especially since my personal photographer totally missed me coming across the finish line.  No idea what was going on there other than likely playing on Facebook instead of watching for me (still thankful she is willing to waste her weekend helping me out).

Eventually figured out where she was and we completed the traditional post race shot.  Unfortunately, we can never find any ambulances there so had to go with the “on the turf” shot.  Paces were pretty good – that first 10K was really nice likely due to the cooler temps.  Dropped a bit over the next 4 miles and then finished a little slower than expected thanks to kicking in the burners too late.

… and the best part of the I-Challenge race – yep, my medal whore affliction is served up nicely by THREE medals.  One for the 5K, one for the Half and then ANOTHER one for the suffrage S U H W E E T!

Thanks to a note on the event’s website learned that the I-Challenge medal had a special feature – they are sun catchers.  The picture below does not do it justice, but the light shows through from the back giving a colorful stained glass look.  Very cool race directors, nicely done.

While going through the (free) race pictures, came upon one that made me absolutely laugh out loud.  Remember that Energizer Bunny comment above, turns out she even got to throw sand in my face as further insult to my inability to gain any ground on her. 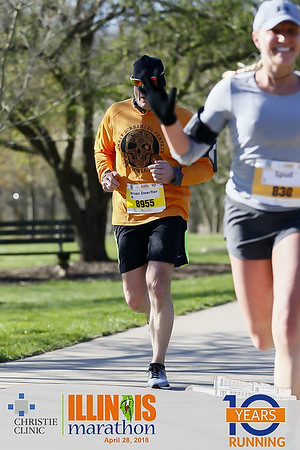 i guess technically it is “hand” in my face, but you get the point.  Look at that smile… enjoying the race, breathing easy – sickening hehehehe.  From one racer to another well done – next year I’ll be looking to switch that order.  All I have for you today folks.  Hope you enjoyed my race recollection.  As a bit of foreshadowing, I recently completed a new adventure in my running career and cannot wait to let everyone in on it.  Until then, stay vertical.

4 comments on “One More for Two More”