Greetings everyone.  Going to try and get a post out, but the campground I am currently at has horrible WiFi – so not sure how this is going to go.  At worst case I’ll have the post written and will upload whenever we find a spot with sufficient connectivity.  Seemed appropriate to go ahead and finish up the two parter started with the previous post – yep, the second part of the Illini Marathon I-Half Challenge.  Unfortunately, only the easy part was completed the night before – the big race was the following Saturday morning with the holding of the 150th Anniversary of my Alma Mater.  I forgot to mention that in the previous post, but you might have been wondering what that extra bling was dangling down from the finisher’s medal.  They added a mini 150th medal on to the 5K AND the Half Marathon medals.  You can see it right side up in the half medal on the left side of the swag shot below.

Now that is the cherry on top for a medal whore like myself (Linda’s term, not mine hehehe).  Not only do you get THREE medals for finishing both races, two of them have extra bling – score!  I kind of left you hanging in the last post wondering how things were going to turn out.  If you recall, my 5K plan didn’t go as planned due to perfect running conditions and a snafu with locating Linda after the race that ultimately left me in pain far surpassing anything a hard night of burpees has ever left me with.  That Friday night was rough.  Lather on some Bio-Freeze, Tiger Tail the hell out of the calves and upper thighs hoping to break up the knots enough to be able to bend the legs and hopefully hold my weight.  This process was repeated time and time again until standing didn’t bring tears to my eyes.  One more hit of Tiger Balm on the last remaining spots before getting some shut eye – it was going to be an early morning.  4:50am alarm woke me to the brisk morning and good news on the legs front.  They were still stiffer than ideal and tolerable levels of pain, yet no reason to complain too much.  The body is an amazing healer as long as you keep it well oiled.

Hit the jump to read more about how the race went!The good news is the weather was even cooler than the night before – guessing around low 40s which meant no reason to fret about the clothes.  Simply go with the same layering as the 5K.  Really all that was needed was to pin my 9911 bib on the outer shirt and toe the line. Yes, my brother Ron did point out the symbolism with my bib matching the emergency call number hehehe.  Sorry, meant to say only thing I had to do was toe the line and SHIVER for the 30 odd minutes that took to get to gun time.  It was a relief to get running and start generating some heat!  Thanks again for Linda getting up at the crack of dawn to get me to the starting line and take the event pictures.  For some reason I can’t find the starting line picture for this race.  Not sure where that is.  If I find it, I’ll add it to the set.

Much like the 5K, the Half Marathon felt great.  The temperature was ideal at the start, although it did start warming up during the second half.  No complaints seeing as how it was far nicer than the marathon race last year – wind was still there, just not in my face for the final legs of the race.  See Mr. Yellow in the shot above wearing the actual race shirt (a no no in my book since you need to earn the right to wear that by crossing the finish line)?  He passed me pretty early in the race – put some distance on me too.  No need to break from my strategy – it’s endurance over speed for these races (at least for me) – took note of the outfit and put a reminder to deal with that towards the end.  At mile 12 I spotted him up ahead – more than enough incentive to close this race out strong.  Guesstimated the distance he had on me, parsed it into the remaining distance  and set to work.

Mission accomplished!  Felt great, powered through the entire race and felt like I’d given it all to the race gods soon after crossing the finish line – no better feeling that that.  Not a PR for me, but very very happy with the overall time and noting what it took to even be able to walk to the starting line less than two hours earlier. 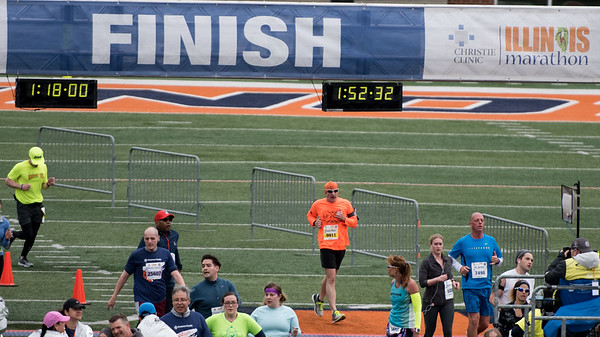 Best of all, was able to find Linda without issue allowing for that totally drained yet jubilant post race shot!  By the way, if they could figure out how to make the entire course like the final 50 yards everyone would be cranking out PR’s and the local knee doctors would be out of business.  Ending on that stadium turf is like strapping little pillows on the bottom’s of your feet and running across a field of springs.

A couple of noteworthy memories from the race.  First off, kudos to the young girl who went flying by me around mile 8.  She was moving for that far into the race and then noted the First Marathon sign on the back of her shirt – she had to be splitting in the very low 7’s as she passed.  I hope she wasn’t lost in the moment and not leaving something in the tank for the hell that is the final 6 miles of the 26.2.

Then there was the guy who came up behind me and shouted “Nice Shirt!” at mile 10.  Turns out he not only participated in the exact same race (the Screaming Pumpkin Race) in Peoria, he also worked at the same local shoe store I get my running gear from.  We introduced each other and shook hands – we runners are nothing if not cordial (even if we spend our race scheming to beat the guy who passed us early in the race).  I even got to pass on my complaints on how the organizers have screwed up the Pumpkin Race to the point my friends and I now head down to Spfld instead.  He must have pushed it to come up behind me and started fading fast as we were talking.  He noted he was not prepared properly for the race and wished me luck as he started dropping back.

Oh, nothing says a race well done than getting your post race picture in a giant blow up chair.  For some reason the worker there was busy trying to take my picture – sorry, brought my own personal photographer.  Legs look pretty white from being drained.

One other moment that just came to mind.  While running in the section in the park with the narrow walkway, a young adult male went to a lot of effort to pass me.  Didn’t think much about it at the time other than noting that it seemed like a lot of work on a narrow part of the race.  He ran pretty hard until he was 50 yards or so ahead of me.  Then he faded allowing my steady pace to eventually eat up the ground until I was right behind him.  He then looks back and proceeds to sprint 50 yards ahead again.  This little scene played out no less than 6 times to the point we made it out of the park.  Look back, sprint ahead, look back sprint ahead repeat, repeat, repeat.  This basically got to be extremely annoying.  I never varied my pace, never acknowledged him and honest, never made a scary face or threatened him with a bloody knife.  Dude was just paranoid for some reason and figured it was time to have some fun on the 7th cycle.  He looked back, again, and started on his sprint cycle again.  This time I accelerated as well staying on his back shoulder.  This brought a surprised expression when he looked back again, which prompted him to hit even another gear.  No worries, slipped my transmission up a notch and stayed on his back shoulder.  Same results, but he had another gear which I also matched.  Based on an assessment of his conditioning this could not last and it didn’t.  He literally stopped dead and walked over to the curb clutching his sides.  Kept my mind off the race over the next couple of miles trying to figure out what the hell he was trying to do.  Whatever it was, not at my expense (did I mention runners are cordial?).

Happy with the times especially holding a steady pace through the entire duration.  Again, not my fasted time ever, but breaking 1:50 always brings a smile to my face.  The age group position was pleasing as well as the positioning in the overall.  The weather worked in my favor this week and dodged a bullet with the strained legs at the end of the 5K.  Three new medals (and two with extra bling) to add to my display.  Now my next race didn’t end with a happy Bri and we’ll save that for another post.