Well, today I completed the last race of the 2016 season (well, at least of the ones that were planned).  In light of that, figured it would be a good time to get a previous race posted.  I hate it when I get too far behind on the race posts mainly due to how hard it is to remember everything about the race once another one is in the books.  The runs are stressful enough without that added task of trying to remember what the hell I was thinking in between big gulps of air.  Getting right to it, One week after running the IVS Half Marathon (link here), I headed down to Springfield IL to participate in the Oak Ridge Cemetery Moonlight Marathon. 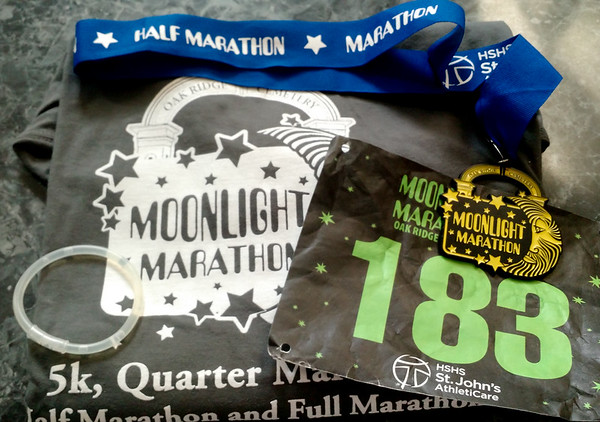 This year the race coordinators decided to cancel the prediction element of the marathon and instead simply added a half marathon and a quarter marathon.  This meant we didn’t need to form a team which turned out to be a good thing since Ryan got hurt and Sung forgot to sign up (Sung also ended up getting injured as well not soon after that).  So, it was just me this year.  Linda ended up having a conflict with a dog show so it was me by my lonesome to take on the half marathon.  I wasn’t too worried about it since I knew the course and I knew I was trained up for the distance based on the results of the previous week.  However, little did I know at the time that this race was going to be a major gut check.  Race day prep was pretty uneventful.  The predicted rain had moved out and the early temps were in norm for that time of year.  Lining up for the race everything still felt fine.  First loop would be in the light and the second loop would require the head lamp.  All good and even reminded myself to stay in control having already experienced the treacherous hills in the cemetery.

Jumping ahead, the first loop went as planned.  Pace was right at where I wanted to be.  The quarter marathon was going off an hour after we had started the half so they were lining up to get their leg started as I completed my first lap.  Oh, almost forgot, like the previous year, after 4 miles into the race, it was as if I was on a solo training run.  There was no one visible in front or behind me with the exception of some union points in the course where the various routes came together.  Just me, the road and gravestones wherever I looked.  The second loop was a completely different story.  As I hit the first hill back out something started to feel wrong.  A dull pain was starting to build in my gut, but my pace was holding so it didn’t cause much concern.  By mile 8 that dull pain had turned into a serious pain in the stomach and a serious concern was swirling in my head.  By mile 10 it couldn’t be ignored anymore, forcing me stop running to walk up a large hill as I contemplated whether I needed to throw up to relieve the problem.  It also became apparent that the night air was not cooling as expected and the reality of overheating was a possible cause.  Walking during a race is like a swift kick to the nuts after training so hard to make it to the starting line.  At the top of the hill my mind told my body to suck it up – we were running again… but not for long.  At 11 the body shut down again and another walk was needed to calm the stomach again.  This was not good and the only thing that kept playing in my head was how mad Linda was going to be.  Taking advantage of a lull in the stomach pain, I was able to start running again and closed out the race (thankfully there is a long downhill in mile 12 that help out tremendously).  Short of the Marathon run (link here), this might have been the most relieved I’ve been to see the finish line.  Too exhausted to reach down and take the timing chip off, I headed over to a nearby wall to rest – race officials were busy running after me to get my chip but that was the last thing on my mind (they eventually got it off of me ha).

Hit the jump to see how this ordeal turned out!

Probably not thinking it through all the way, I headed up to the after party area and grabbed some chocolate milk. While up there they posted the results (above).  My pace was pathetic, but during that whole second loop only 3 or 4 people passed me and those were likely quarter marathoners.  I quick tally of the age groups and it got me wondering.  Looks like I was going to have to stay for the awards presentation after all.  This is when things turned very very ugly.  Eventually the pain in the stomach grew so bad that I walked over to an isolated area and threw up noting that it wasn’t just fluid (sorry, probably didn’t want to read that), but it meant to me that my body wasn’t processing the fuel right. Minutes after that, they called my name for taking second place in my age group – cool!  I walked up to get my award (a very nice ceramic tile).  As luck would have it, they had misplaced my award which was a bit disappointing.  They felt bad so they gave me this as a token of appreciation with a promise to have it remade and sent to my house.

Note, then Heed was the prize for the full marathon finishers – they had an extra one. Once the excitement was over I walked over to the same isolated place and threw up again – sigh. Feeling a little better I made my way to the bathroom, changed clothes and headed for home. This turned out to be an hour and half of shear hell. As soon as I hit the outskirts of town, the pain started back up and there was only one thing that was on my mind – get home and nestle into my bed and figure out what is wrong the next day. A goal that would have me taking just about every exit between Springfield and Peoria to throw up again and again and again. Not a whole lot I could do but gut check through it. Eventually the driveway was in view, a few more minutes and I was in my bed hoping to turn the lights off on an awful night – well, except for taking second in the run. Something was off and my first thoughts were heat exhaustion. Linda let me have it the next day for driving back in that shape but there is nothing like the comfort of home when things are going right.

The good news is another race conquered, but this one was a battle for sure. This all left a lot of questions for today’s half marathon – stay tuned to learn how that turned out – the fact you are reading this means I at least lived to tell about it ha!