I swear this last month has lasted at least three months!  Since middle of September, I’ve ran three half marathons, held our annual Halloween party, finished like 8 posts, made it through a crap load of work on my real job and now trying to get some badly needed rest which consists of me hiking up and down mountains.  Since November seems like it is never going to get here, decided to break out some of the Halloween posts early this year.  Let’s start on the decorations front.  Remember those Posies from last year (link here).  Well, this year they are getting an upgrade.

Although these have not been put together yet, you can definitely tell they’ve been put on a weight training regimen… and they kind of got gendered.  Focus in on the one on the far right.  It took a bit to get the process all figured out and that one is the result of finally getting everything right.  The other two I’ll talk about as a memory points for me and as a cautionary tale for those of you interested in trying this out for yourself.  Starting at the beginning, the key element in the new Posey configuration is this.

Hit the jump to get details on the latest of the Posey improvement projects.

For those of you not familiar with Great Stuff, it is a spray foam gap filler.  Basically you spray it in the crack, it expands way beyond what you ever intend it to and presto, your opening is filled with a fairly dense foam after adequate curing time.  The other key element in this version is the body forms, 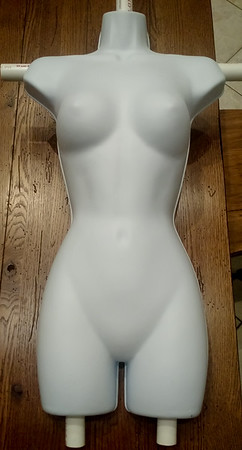 Based on articles I read on some Halloween forums, I tracked down hanging mannequins on Amazon.  Just to give me options, I went ahead and picked up an adult male, and adult female, a juvenile boy and a smaller boy.  Since the female came two to an order, that was the logical point to start – if it went horribly wrong there was another one to attempt to get it right.  You can tell from the picture above that a PVC frame was put inside the body cavity.  This was needed to give more support to the foam body and allow me to attach the appendages easier.  Holes were cut in the neck, arms and legs to match the 1 inch PVC that was being used.  I also wanted to make it easier to attach the parts so put a coupler on the inside just before the openings.  This allowed me to put short PVC pipes through the openings which kept the frame in place as the foam was expanding.  In the various reference articles, they didn’t do this and simply recommended putting a weight on it to keep it down – improvement number 1. 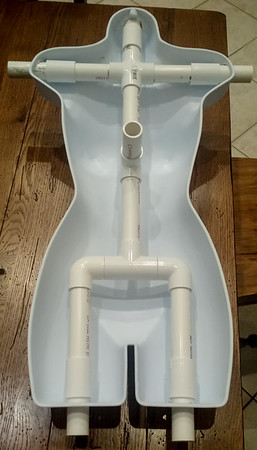 Zip ties were added as a precaution to keep the foam attached to the PVC frame.  Not sure if this is really needed or not, but it seemed to help after the first one so kept putting them in for the rest of the foam builds.  Basically, just made big loops and put them around the PVC pipes allowing them to hang down into the foam.  Once the foam had dried all they needed to be was zipped tight against the frame.

Next step in the process is to wax up the inside of the body – this is easily done with Vasoline. Make sure you get it spread over the entire body but keep it to a thin layer.  This will keep the foam from sticking to the inside of the body allowing you to pop it out easily – the molds can be used over and over again – you might have to add some more Vasoline before each build if it dries out or gets scrapped off with the foam.

Another critical step – before you put the foam in it and after the waxing, spray hot water on it.  Not a lot, just enough to finely coat the mold – this will help cure the foam.  For the first attempt I filled the entire thing full – used two large cans of Great Stuff and made sure every gap between the frame and the mold was filled plus a healthy dose of foam over the frame level with the sides of the mold.   You need to spray hot water on the foam once you have filled it (again, to help curing).  Somewhere in all the excitement I forgot about that whole “expanding” part of this stuff.

… and expand it did!  It just kept getting bigger and bigger.  At this point it didn’t seem like an issue – just a fuller body.

Little did I know at the time, that too much foam is indeed a problem.  When I went down to see the results the next day (assuming adequate curing time).  I didn’t get a picture of it, but there was a major blowout on the left side – so much that a large part of the foam was completely missing due to expanding internally and overflowing the mold.  My first attempt wasn’t going that well.

Now that is a nasty flesh wound right out of the Jaws movie.  After pondering this issue a bit it came to me that basically this was just a gap – and what better to fix a gap than MORE spray foam.  Broke out another can (this time a standard size one) and went to filling.

This of course expanded well beyond the intended area (because it ALWAYS does with this stuff).  No worries, just broke out the foam sculpting tool (basically a heated wire across a Y frame).  A little trim there, another trim there and presto – a new fuller body for my Posies! 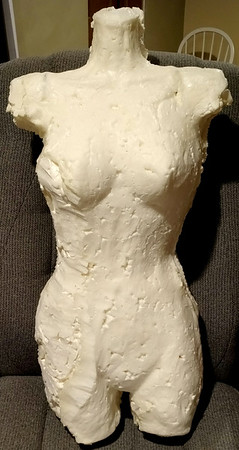 First attempt came out pretty nice, but I had purchased a bunch of cans of the foam and the mold was ready to go for another round.  Quickly cut some new PVC for the body and sprayed the foam in again.  This time not going too overboard.  Although it did seem to expand more this time – not sure if I just shook it more or the expansion rate varies that much from can to can. 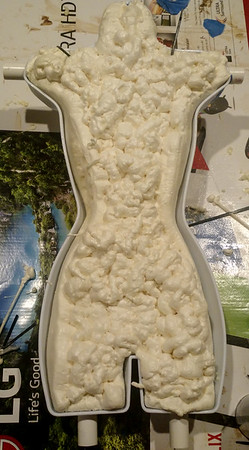 The next day I was all excited to see how it turned out.  Popped it out of the mold and my excitement quickly turned to disappointment.  The foam didn’t dry right in the middle and instead came out as a gooey mess.  Dammit – what went wrong…..

After a complete assessment of the process it occurred to me that the initial hot water spray wasn’t completed – too eager to get another one cranked out caused me to forget a key step.  Eventually the gooey front did dry but the results were creepy as hell.  No worries, grab another can of the foam, a few touch ups on the Vasoline and a quick cut of another body frame.  This time the middle T was left out since I wasn’t sure I really needed it – turns out that I do like that if nothing more to help hold it when working on it – also comes in handy if you want to fix it to something or you want to put a motor on it (hint, hint).  This time I sprayed it first and went a little easier on the thickness of the foam focusing on making sure the parts under the PVC and the outer edges were full.

This worked out perfectly and you can see how much better it looks – check out the first picture on the blog again and you will see the last version on the far right.  Okay, now I had the foam process down.  The next desire was to add better feet.  The previous Posies had a PVC foot and those really didn’t give it a complete look – nothing like having a cool costume on it only to have PVC pipes coming out at the feet.  I had an idea and all it would take would be some more foam (there is really no limit to the amount of fun you can have with this stuff), a few pieces of PVC pipe, an elbow coupler and some old shoes – the hard part is usually the latter, but thanks to all the miles I’ve put in this year, there were plenty of worn out running shoes and a couple of old pairs of work shoes would do the trick.

Guess what… the foam expanded way beyond what it was suppose because that is exactly what that stuff does every damn time!  Back to the foam sculpture tool and that little issue was fixed up.  That worked out so well, I went ahead and made a bunch of them from all the old shoes that were laying around the house.  Yes, you can see from the picture that every one of those also expanded beyond plan and I even made a point to put less in these on this round – doesn’t matter – that shit is going to expand too much and there is nothing you can do … nothing – trust me. 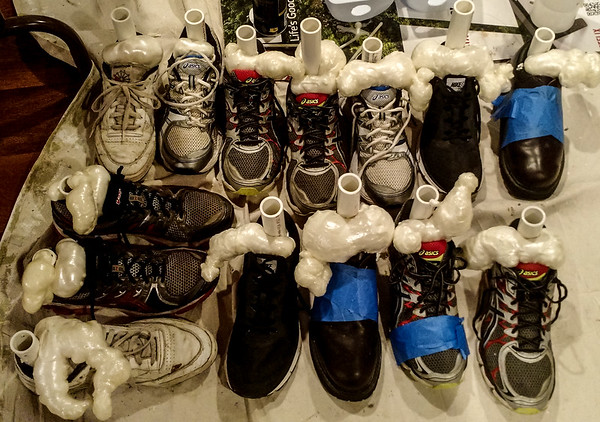 I already blogged about using the chain link fence ends as joints so I will not cover that again in this blog (look back at the previous Posey posts if you want details on that).  Added the fence ends to 1″ pipes, cut the length to fit into the elbow in the shoe and presto – all new feet for my Posies! 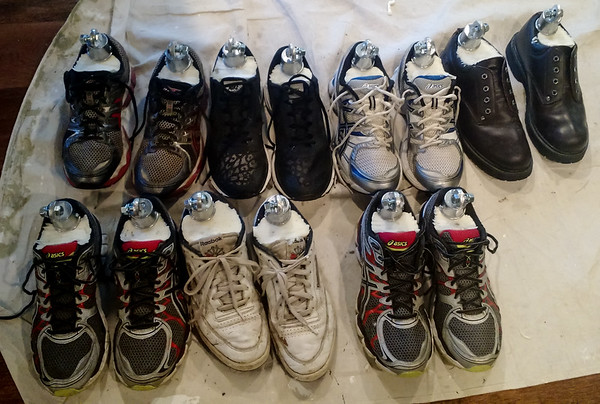 I decided to break this post up into two due to the length it would cause if I shoved everything I had planned into a single product.  Now that the Posey body concept was coming along nicely and the feet were a total success, it was time to try and improve it – refine it, perfect it and if all possible …. try to make it cheaper.  That is pretty much my method to all projects.  There are some definite improvements on this process and I’ll try to get those covered in part two – stay tuned.  If you are interested in making some of these for your own Halloween projects, you will definitely want details on a few more enhancements I made.