I am beginning to realize where all my time went this year.  I had forgotten just how many new projects went towards this year’s Haunted Trail until I put all the images together in order to make these tutorial posts.  Another thing is perfectly clear, I need to take more pictures during the build phase.  I tend to get wrapped up in the project and forget to snap pictures at key progress points.  This is one of those times.  I’ll have to talk you through some of the interesting design choices – will make it a point to do better for next year’s efforts.  Living in the now, welcome to another Halloween 2017 project.  This one was more of a challenge than a new concept.  I saw a decoration for sale in one of the high end boutique Halloween catalogs.  You know, the ones that have a few unique items if you are willing to mortgage your house.  In this year’s catalog, there was a ring of 6 witches, with light up globe heads.  The cost for that decoration – ~$190.  Of course this was deviously disguised since they showed the ring of 6, but sold them in a set of 3 so it looked half the price. Oddly enough, Oriental Trading Company came out with a similar idea in the $160 range (now on sale for ~$120) again, implying more but sold in 3s.

It was a pretty cool decoration, but paying that much for cheaply made props just seems like a complete waste.  The other aspect of this was being fairly tame on the scare side so it could go on the early part of the Haunted Trail.  That side hasn’t been getting much love the last couple of years and wanted to give the younger guests something new.

First task, design a pattern that would limit the amount of wood I needed to buy.  Assuming a 4×8 sheet of underlayment (same wood used for the Zombie Silhouette project link here).  With those dimensions, I could get three patterns out of each side as long as I kept the bases in the 2 foot range with a foot for the head width (2 + 1 + 2 + 1 + 2 on other side).  With those constraints, came up with this pattern.

Hit the jump to see how this witch project turned out!

Note the height was the full 4 feet knowing that the head was going to sit on top of this structure.  Laid out the pattern on the sheet of plywood and traced with a permanent marker.  Slapped a standard wood bit on the RotoZip and quickly cut out each shape.  Took me about 2.5 hours to get them cut and then another 1 hour to go back and sand all the edges. 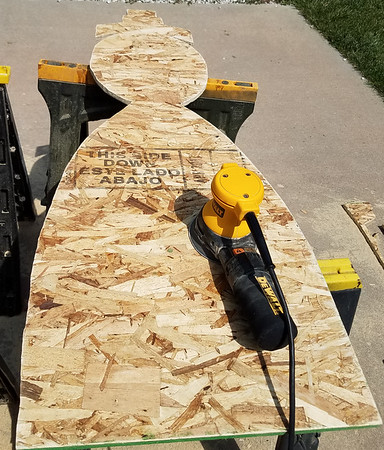 To keep the cost down, opted not to go with spray paint even though that would have been a lot faster.  Problem is that would have been significantly more expensive and I was trying to come in at our under the boutique catalog’s price.  The course wood made for a slow go, but eventually got two coats of black paint on each side of the witch frame.  Originally I was just going to use stakes to prop them up on the trail.  It became obviously very quickly that it meant they could not be stood up in my shop.  I had a bunch of 2x4s laying around from other projects along with some ripped ones use for shimming my basement walls out (basically 2x4s ripped right down the middle).  Keeping with design rule #1 to make sure new decorations store well, I made a stand that the witch frames could be set in.  Simply pull them out and store them flat for next year.  I’ll probably redesign the stand fins next year so I don’t have to actually unscrew them from the 2x4s yet still allow them to rotate parallel to the frame.  First task accomplished – 6 free standing witch frames. (Don’t pay any attention to that box behind them, that is for an upcoming decoration post hehehehe). 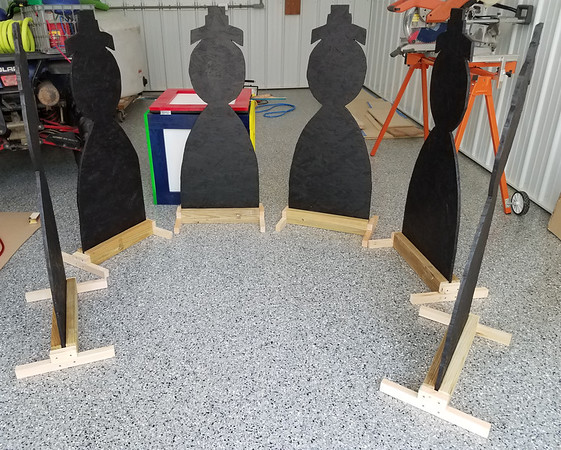 Next up, design the witch heads.  Based on the images, it looked like they were just using globes – probably plastic.  Did some digging on Amazon for plastic versions without luck, however, they did have plenty of standard light globe coverings that looked like they would do.  Problem was the cost.  Those things are expensive and there was a high likelihood that one or two might not survive the rough trek down and back from the woods.  Eventually stumbled on a special Amazon Prime offer that had an introductory offer for 3 8″ glass globes for ~$8 apiece.  They had this stupid limitation of 3 per household before going up to $24 apiece – I needed 6.  That didn’t take a genius to address that issue.  Now I had 6 heads.  Just needed a way to attach them to my witch forms.  Since they were glass, I wanted to make sure they would not fall off.  To Autocad Fusion 360!  Whipped up a holder that the globes could sit in (same concept as the lights they are actually used for) and added a slot with some tabs to go on the top of the wood frames.  Note, took out a bunch of unneeded support on the holder so it would print on the 3D printer faster and give easy access for the lights later.  Each took about 2 hrs to print – always excited when I can use the solid modeling skills I went to college for. 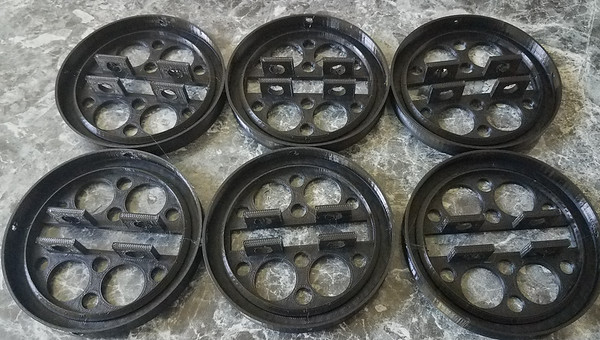 Okay, now just needed to slip these over the neck slot I designed into the frame (I put a lot of thought into that frame design).  Once it was on the frame, I just drilled a hole through the large tabs in the middle and put a bolt through it.  Those globes were not going anywhere!  Also not the holes in the outer ring of the holder. Those are for screws to hold the lip of the globes down. 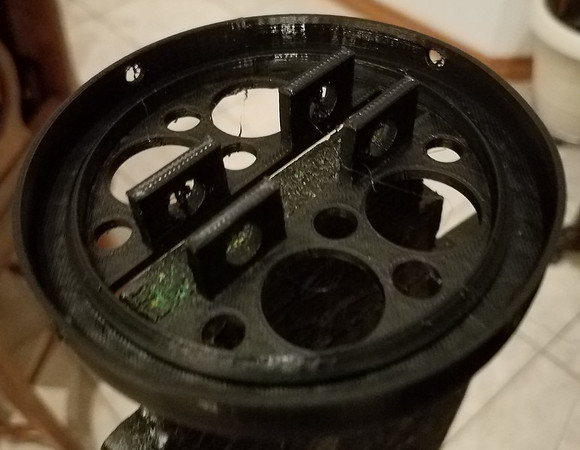 Next up, go convince Linda to go to Joann Fabrics with me.  She’s the expert when it comes to dealing with the fabric side of the projects.  Plus, it is always better to take someone with you that knows the yardage lingo and is willing to chit chat with the fabric cutting ladies. Plan was to have a stiffer felt like material for the witch gown, and some nice netting to put over the head.  Oh, and some cheap material to use for the arms.  With Linda’s help we found exactly what I wanted at good price points – admittedly still more expensive than I was hoping to spend. 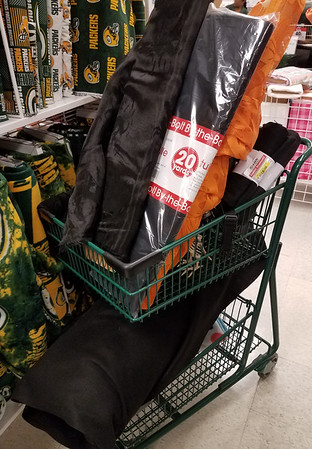 Clothes for 6 witches add up quickly.  One of the witch frames was brought in from the shop so we could lay out the clothing.  After some noodling and experimentation, Linda and I figured out how to cut material in order to maximize the material we bought.  The heavy witch gown was folded in two and then wedged in under the arm stubs (again, another design point put into the witch frame.  The mesh material was rolled up to simulate arms and zip tied to the arm stubs on the frame.  The veil material we found had witches already fused into it – absolutely a perfect find for this project.  Cut that material so it would drape over the globe head and hang about halfway down the torso giving a fuller body look to the frame.  The veil was cinched down to the neck with some ribbon we found that had ghost forms on it.  Found some nice (and again, cheap) witch hats on the web to complete the ensemble. 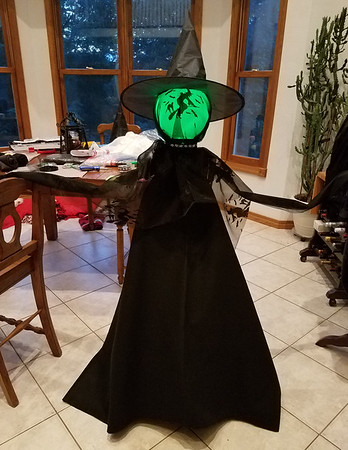 Once again, went to my standard 2 LEDs in parallel hooked up to 4 AA batteries to give it light.  The LEDs were tethered to 1′ long wire so I could just push them up through the holes in the holder.  The battery holder was attached to the back of the wood frame too keep the wires from pulling out.  Due to the rough trail into our woods, the witches had to be assembled in place.  Through the chaos that is the trail prep, we forgot to take our test witch out of the kitchen.  Never realized this until much later in the night, that my witch ring only had 5 witches – too funny.

My brother Ron helped get these witches ready for the big debut.  The stand fins were staked into the ground to protect against the wind that was swirling in the valley the trail traverses.  That kept the frames in place (protecting the glass globes), but the hats kept blowing off.  Will have to address that next year – maybe put weights in the hat to keep them down.  We ended up slapping a large caldron in the middle of the ring complete with a skeleton and light (Ron’s genius idea).  I had bought a pond bubbler/mister based on a great find from my friend in Haunt Brad.  Of course, once again, because of the hectic night I forgot to put it in the caldron – oh well, live and learn for next year. 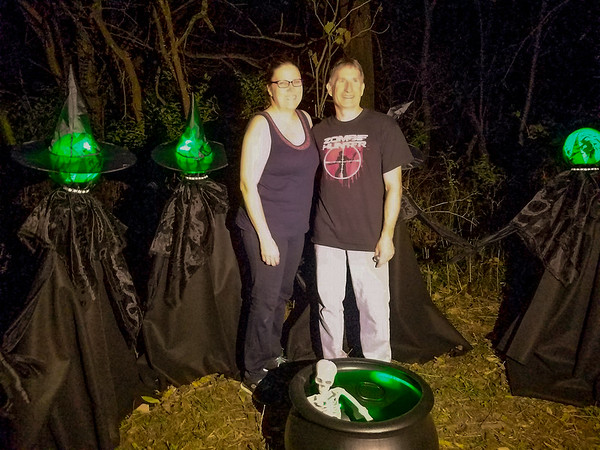 All things considered, I probably came in slight higher than the Oriental Trading version, but less than the high end boutique version.  I like to think I have a much more refined product – certainly sturdier than the frame those other offerings have.  Very happy with how these came out – got several surprises when people found out these were hand made and not purchased.

Come back soon, I still have a few more projects to document on this year’s haunted trail!