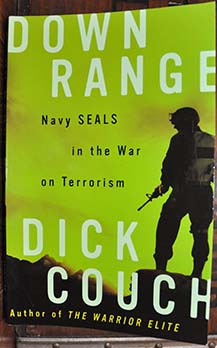 As much as I benefited from the long month in January, February is basically a cruel joke on my deadlines.  This being the 6th post of the month, I can rest a little easier now and start prepping for the next month of which I already have two of that set already identified.  But you don’t care about that right now, you want to see if my latest read is worth spending any time with.

Although not at a let down level as the US Women’s hockey team that was essentially owned tonight, Down Range: Navy Seals in the War on Terrorism was not as engaging as the previous novel I read from Dick Couch called Chosen Soldier.  The focus of this particular novel was the early efforts in the Afghanistan and Iraq wars.  Chosen Soldier was a slight deviation from Couch’s normal topic in that it focused on the Green Berets.  However, in difference of sorts, this book focused more on the land engagements of the new transformed SEAL engagements as it extends its lethal capabilities into the heart of the enemy country.  Dick is still an excellent writer and is capable of translating the semantics and warrior mindsets into something desk jockeys can relate to.  I think the real let down is a result of the lack of good field examples.   This is largely due to the effectiveness of the SEALS in these environments and what appears to be a deficiency in the local defenses.  This has changed since this book was authored (2005) with the emergence of insurgency fighting, but definitely during the early engagements with the Iraq army it was a route similar to Canada over US tonight.  It also did not go as deep into the training aspects of an elite warrior which is one of the primary reasons I spend my wind down time diving into the chapters.  Note, it did give some excellent insights into the Close Quarter Defense system they employ to clear out hostile rooms which is quite fascinating due to the mental aspect of that.

As always, I was able to find some things in the book that make the precious time spent all worth it.  Take the jump to see a synopsis of those items