Spent the day tearing out all the tile in my master shower which definitely had its moments – like the 200 pound sheet of cement board with the tile still on it that decided it would take it upon itself to try and kill me – unexpectedly, it broke free of the stud,  just missed my head and then hit the ladder I was standing on before embedding itself in the shower pan – thankfully the pan was the reason all this work was set in motion so it got what it deserved.  I’ll probably have to add that to the list of events which I like to label as the “near misses” list.  Not nearly as long as the birding list, but a bit longer than I like to admit to.  That which doesn’t kill me, serves to makes me wiser.  As I reflect on the day and prepare for tomorrow’s planned half marathon training run, thought I would pad the bird list and maybe gain some ground on Ron. 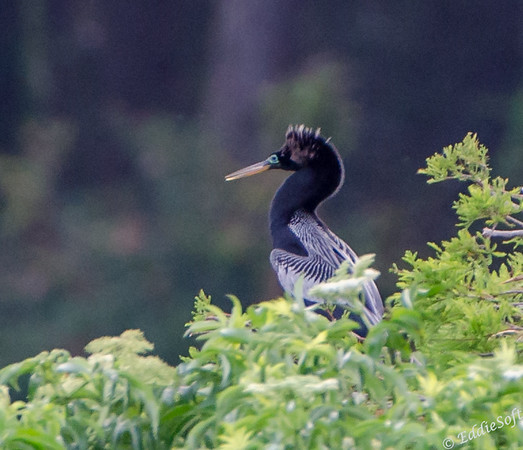 Ooops, should have mentioned in the intro that these shots are not my best work.  In a bit of luck, while shooting the target for the trip to Georgia, another bird showed up that I had not yet officially checked off the list.  I have a few pictures of this bird from a quick trip to Florida to drive my parents back from their winter stay.  Thanks to a vendor conference in Orlando, I was also able to get a shot of one with my cell phone.   All of those shots turned out to be awful and therefor elated to get a third chance at one.  This bird is becoming my nemesis – three attempts and still nothing I’d be willing to hang on a wall.  Now taking the +1 …well, that is a completely different story. 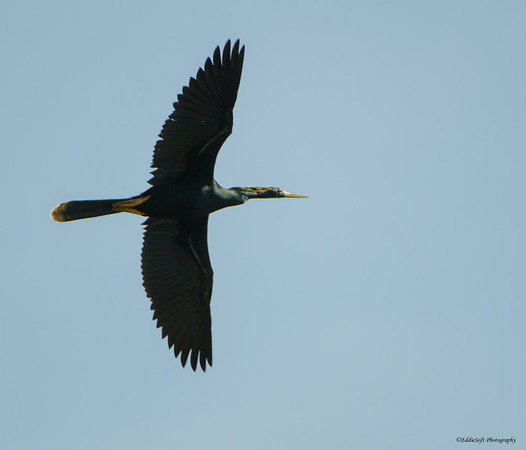 Hit the jump to read a bit more about this flying cross!

So this is an Anhinga and one of the most distinct birds you will ever come across at least in North America.  Long and slender profile similar to a giant spear with wings complete with one lethal tip.  The irony of being at a place named Harris Neck National Wildlife Refuge and taking a picture of a bird with a monstrous neck brought me a quite a chuckle – it’s the little quirks in life that make it all worth it. 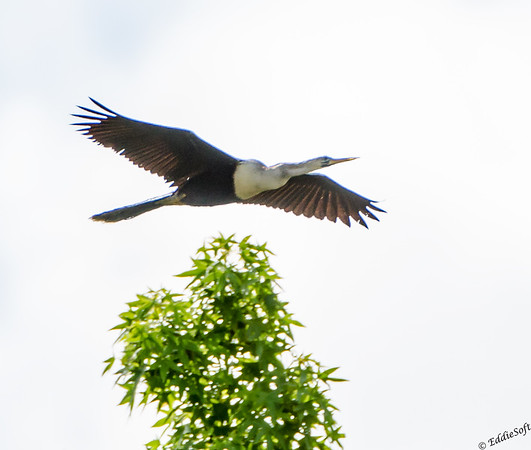 Mentioned this in the previous post, but it was mid-day at the refuge and the swamps were already warmed up from the hot Georgia sun.  This brings out the heat vapors which drive the autofocus on the Beast crazy trying to cut through to the subject.  Also didn’t help the subjects were keeping their distance requiring some major digital darkroom cropping.  Still no excuse for the poor execution… wait, did I mention there were Gators circling us causing a nervous shutter finger – oh, and old ordinance left at the abandoned airfield were randomly exploding causing bad twitching on the tripod….not buying those excuses?  Neither did Linda.  I promise I’ll get it dialed in for my fourth encounter.

Let’s talk a bit about this unique looking spear, I mean bird.  You probably noticed some variety in the plumage.  The first shot in this post is the male breeding plumage.  They actually get a blue/turquoise ring around their eye which is really cool looking especially against the black feathers.  They also have silvery streaks on their backs and wings and feathery plums on their heads/neck.  The other feather pattern you see is of the immature or female.  They have dark feathers to mid chest and then a tannish coloring that carries through to their bill. 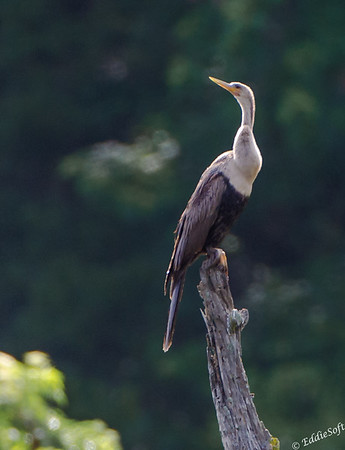 The Anhinga is actually a surface diving bird that will often move through the water with its body either slightly submerged or fully submerged with just its long neck stretched out like a cobra ready to strike leading to one of its nicknames as the “snake bird”.  Cornell brought up a visual of Loch Ness which again made me chuckle seeing Brad’s comments on my last post. 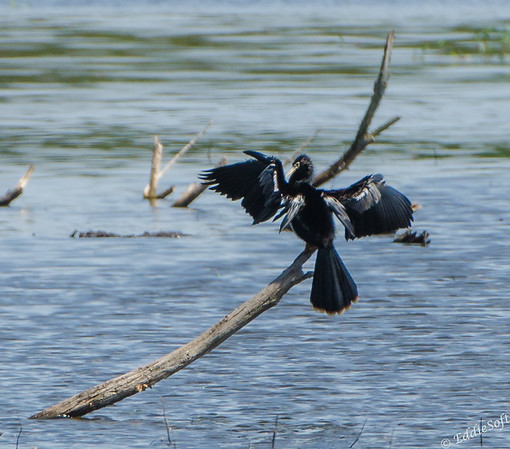 The Anhinga is able to easily dive under and move stealthy through the water thanks to an odd feature for a waterbird – their wings are not waterproof.  This along with their dense bones (similar to the Loon) give them the ability to hunt without alerting their prey.  Once submerged they set about trying to spear unsuspecting fish with that deadly dagger of a bill.  I would like to be able to give you a firsthand account of that, but I have never seen one of these birds in the water, much less with a successful catch impaled on its bill.  Typically I find them sitting on a log or tree with their wings outstretched trying to get them dried off so they can once again take to the skies.  Cormorants have a habit of doing that as well 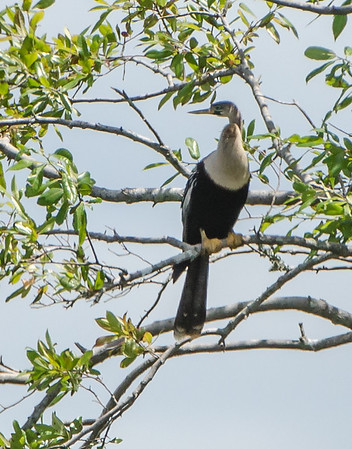 The Anhinga hangs out primarily in Florida and along the East Coast down and around the Gulf Coast.  Looks like they also extend to the west coast of Central America.  They are adept at using the thermals to soar at great heights with their body and neck stretched out in a fairly straight line with their wings straight perpendicular out giving the impression of flying crosses.  Their second nickname, “turkey” is in reference to their tail which looks like it belongs on …well, a Turkey.  Speaking of looking like a Turkey (at least from the neck down hehehe).

Finally, the third nickname for this sleek bird.  Cornell informs us that Anhinga comes from the Tupi Indians of Brazil and means “devil bird” or “evil spirit of the woods”.    They do not go into detail on how they selected this name, but my money is on their call which is downright chilling.  Hard to describe this demented frog like sound – maybe one of those toy lawnmowers you might of had as a kid that made the fake whir made by toy makers that apparently never mowed a lawn in their life.  I recommend going and checking it out for yourself (link here). With that, going to call it a post.  Hopefully tomorrow is less eventful for me.  Will see you back in the Georgia swamps in a few days.