Today I watched a Subway employee sort cheese.  Actually, sorting might be the wrong word since that it implies there were multitudes of different cheeses thrown in a giant pile that needed to be properly organized.  Yep, wrong word.  Let’s go with “aligning” cheese.   I was in somewhat of a hurry thanks to having recently injured my lower back during a run (interesting story, will save for another lead in).  It basically hurt to stand (…or sit… or lie down) and therefore wanted to get back to the car and home before someone saw tears welling up.  The Subway employee was standing at the counter directly in front of the lady ahead of me.  There she proceeded to align the pepper jack cheese.   One by one down the foot long stack of triangles.  Ever find yourself staring at something and too mesmerized to look away?  One eye was on the cheese dance, the other was on the lady ahead of me trying to predict her breaking point.  Word to the wise, psych classes are NOT healthy for you.  To her credit, she waited until the cheese was sorted and properly stored in the container at which point she gave her order and asked for .. wait for it ..wait for it .. Swiss.  The Swiss bin was empty forcing her to go back and get new packages.  To her credit, she just took 4 pieces and finished her sandwich.  With that done, she came back in front of me to get my order .. umm no, she opted to take the rest of the Swiss triangles out of the bag, align and put in the bin not looking at me once.  “Rest” is somewhat of a guess since I turned and hobbled out the store.  Nothing like having a direct reminder not to leave my customers hanging … especially my loyal readers.  So, without delay, I give you the first +1 of the year. 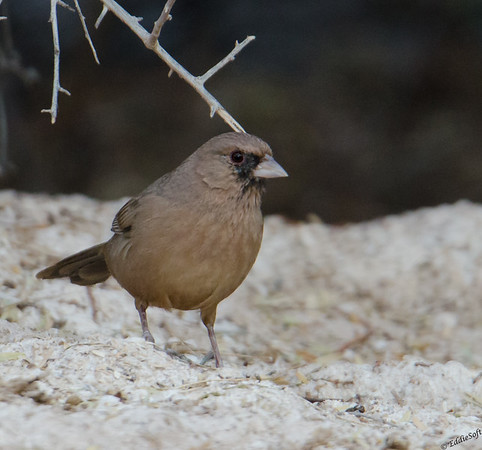 This would be the very rare Headstick Sparrow.  These brown jobbers develop antler like protrusions in the middle of their head providing a built in defense against aggressive Owls and the ability meld into underbrush when land predators come calling.  Don’t worry, Linda isn’t buying it either.  I think the words “crappy photographer” just rang out from her den.  Sigh, okay, this is not a Headstick Sparrow, but it is from the Sparrow family – the Abert’s Towhee.  Here is a better shot sans stick. 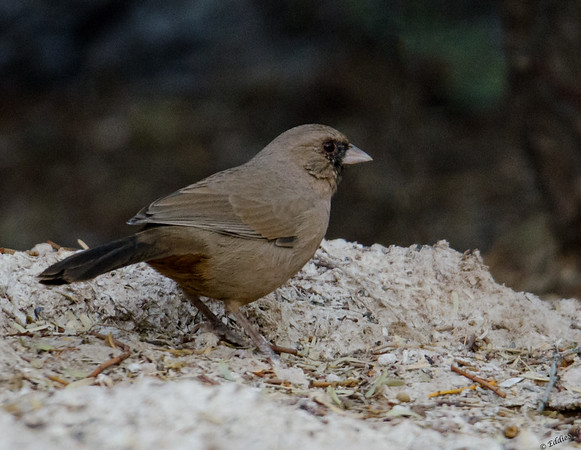 Hit the jump to read a bit more about this secluded Sparrow.

This is definitely not one of flashier birds I’ve featured on the blog.  However, the intriguing element is just how localized this particular species is.  The Abert’s spends the year within a tiny cross section of Arizona with a bleed into the southern tip of Nevada with a small jog into New Mexico.  It is the Nevada area where we found this one – in particular, the Wetlands Park Preserve in Henderson, NV.  Linda and I took a quick trip out to Vegas last November to do a little birding and gambling over the Thanksgiving break.

I am really starting to warm up to the Wetlands Park Preserve.  Henderson Bird Viewing Center will always be my go to spot when in the area, however, since this place is only 10 minutes or so away, recommend checking it out if you have extra time.  Wetlands has a nice mixture of paved and chipped paths winding through the area.  On our way out, I spotted a Gambel Quail sprinting out across a thicket opening.  That, of course, resulted in a quest to get it in the tin.  Not sure what your familiarity is with Quails, but they are pretty fast and prefer not to be seen.  The previous encounters that week came up empty as each Quail specimen would pop out, stick its tongue out at me, turn, moon me and then dive back into the thicket before the shutter raised – the degrading life of birders!  Ended up there were 4 Quails in the thicket opening all scattering when spotted revealing our Abert’s foraging the area.  Had to kick up the ISO to even have a chance of cutting through the low light provided in the brush.  Managed to get the critical angles that lead to the ID (which was made once we returned home – was not familiar with this bird until the encounter).  Those dark eyes and the reddish undertail are the dead giveaways. 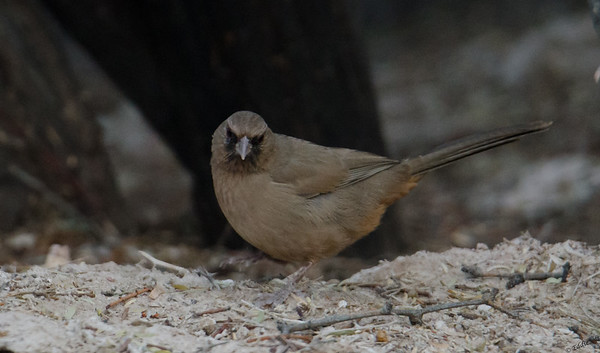 As mentioned earlier, the Abert’s is a member of the Sparrow family.  Definitely on the larger end of their size scale both in stockiness and tail length.  They sport the thick bill and a coloring that helps conceal them in their preferred desert habitat.  To be perfectly honest, if it was not for the Quails, this +1 would have never happened (that was Ron you heard crying out “Damn Quails!!”).  He will need to put some effort in to make up this increment (payback for the Kittywake he scored over me last week). 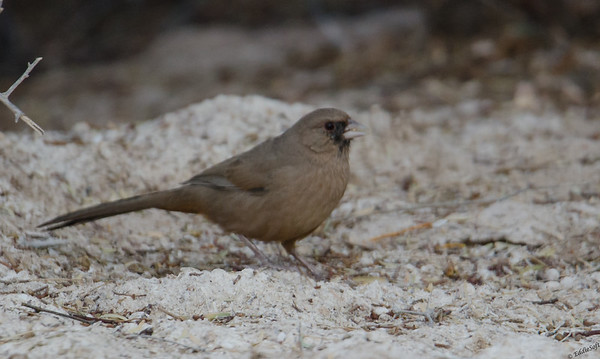 Not much to really provide in the way of cool facts.  According to Cornell, It was named after Lt. Col. James Abert, a Topographical Engineer for the US Army, considered to be the first person to obtain a specimen from New Mexico.  Pairs bond for life and often photographed with sticks coming out of their head.

I’ll leave it there, Linda is upping her verbal assault on my photography “skilz”.  Your harshest critics are always the ones that know you the best.  Stay tuned, more on the way from Sin City.