I hardy hello to all my readers out there!  It’s a new month and time to get going on my posts wouldn’t ya say?  I was planning to get some pre-work done on a future post today while at our dog’s Agility Trial.  Unfortunately, that didn’t happen because I ended up taking pictures all day instead.  The good news is I already had another bird set ready to go.  Actually multiple water fowl earned the post spot today.  I’m going to start with one that apparently got the short straw when it came to appearance draws.  I’m talking about the American White Pelican. 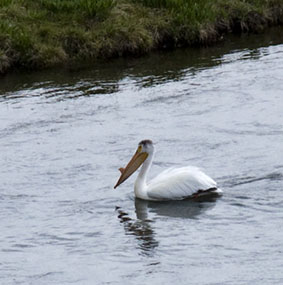 I  spotted this one contently paddling along a small river while on our Yellowstone trip.  The growth on his beak signifies this is a breeding male.  Luckily the chicks apparently dig this blemish and is used in their courtship (no, I don’t want to know how) as well as ritualized combat.  While looking through the lens at this guy, all I could think of was one of my favorite scenes from Uncle Buck when John Candy (rest in peace) lit into the grade school teacher because his niece was characterized as a sillyheart.  Maybe he meant a MUSKRAT (dundun dun dun… blog teaser…).

I was actually disappointed I did not get to see him fish.  At a later time on that trip, I came upon a couple of them out in a marshy lake. 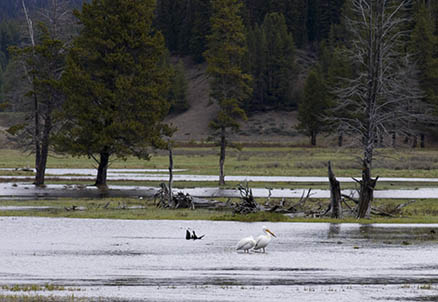 Apparently this is their preferred setting.  It is actually a pretty nice picture with the deep color in the trees contrasted against the bright white of the pelicans.  I had to shrink it down significantly which resulted in losing some of its visual.  Let me bring it in a little for you.

As you can tell (even with the zoom fuzz residuals) that it is another breeding male with likely his trophy wife.  Once again I was unable to witness any fishing activity which sounds pretty interesting.  In one of the descriptions in the bird guide, they described the technique.  They work in groups to herd prey into shallow water or they ease into a school of feeding fish gulping ones that stray close to the surface.  This description did not align with the settings I took these shots based on the most I found together was TWO.

Hit the jump to see two more birds being featured today, the Goldeneye and the Canadian Goose