Apparently I crossed some kind of red line in the sand from some of my loyal readers. It appears having the audacity to have 8 … count them … 8 posts on the topic of birding is enough to bring out the claws! It is quite surprising that these people are able to be so verbose in their email angst having to tap away on the keyboard with those pointy talons. So kudos to being able to pull that off, but now my email provider is sending me warnings that I’ve exceeded my quota and threatening to down me faster than a Twinkie 10 feet from Michael Moore. I even tried to defend myself with the argument that one of the posts was technically just a book report that happened to have some birds on the cover – nope, no appeasing the spurned. Well, we cannot have an unhappy fan base so in an attempt to rectify my wrongs I bring you …. 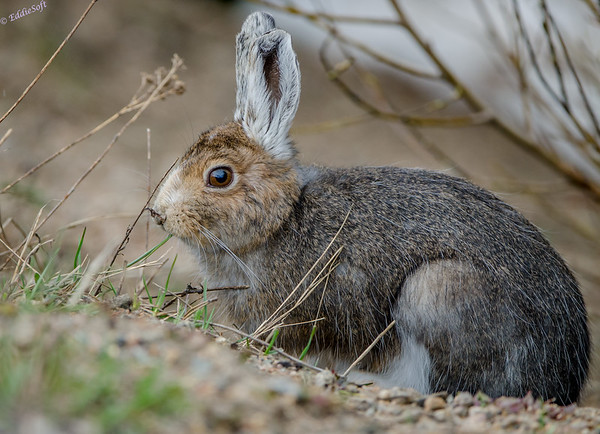 Hoping this cute and cuddly bunny will put everyone in a better mood.  This little doe was taken at a trail head in the Rocky Mountain National Park back in May of 2014. (let’s go with “doe” this time because in truth I have absolutely no clue at this point and none of my shots reveal any clues – probably for the best).  We had just come off a trail with a healthy collection of snow covering it.  The Rocky Mountain May is a lot colder than our Midwest Mays – a lesson learned the first time we went out to Yellowstone at a similar point in the year – burrrrrr.  On the return I spotted a Junco hanging out on a fence post and hopped over there to get some shots in the tin.  Based on the number of shots I took of that Junco, the birding on the trail must not have been that good.   After wearing out my shutter finger I headed back to the vehicle to warm up (guessing this was also at the encouragement of Linda who was likely getting frustrated at my long attention to a single bird).  On the way back, this cute fur ball caught my attention hanging out in a small opening under a tree.

Hit the jump to see a few more shots of this bundle of fur and find out why it is so intriguing to me.