Hello everyone!  Been awhile since I have been able to break away from the grind to get a post out.  Truth is, I’m currently overwhelmed and trying to get back in control of my schedule.  Figure this will not happen until the second week of October when my race season finishes up (with 3 half marathons in about 5 weeks), our Annual Halloween party has past and some key projects at work should be wrapping up.  With all that, I’m still not willing to let my post streak go without a fight (wish me luck!).

Going with something a little different for today’s feature.  First off, I have to use pictures from my cell phone and to classify them as crap is almost too good.  Unfortunately, that is all I had with me when I stumbled on this colorful insect. 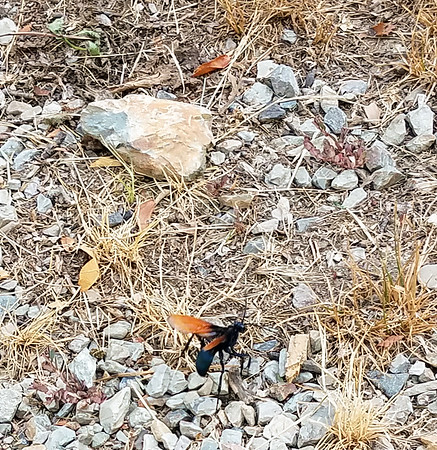 Hit the jump to find out what this is .. if you dare!

We were in the middle of our waterfall and birding adventure across most of Arkansas during the last 4th of July holidays.  Weather was clear and blistering hot making for some horrible conditions for photographing waterfalls.  Felt bad for Linda since this was her trip for a change after allowing me to dominate most of the previous vacations with birding outings.  We ended up at a pretty nice campground around the 4th.  I was just standing around after getting everything hooked up when something caught my eye on the ground.  Initial assessment was just a brown leaf (as in the top of the first picture) and was just about to dismiss it when it moved on its own. Hmmm, turned into intrigued which turned into – damn, where’s my camera.  Suspecting a detour to get The Beast out of the camper would likely take longer than this encounter was going to last – only option was to go with the phone camera (apologies again).  Sure enough, this was NOT a leaf.  Closer inspection brought similarities to a Wasp.  I’ve had my share of experiences with Wasps and their ilk and for the most part they tend to keep their emotions under control and more importantly their stingers holstered.   This specimen was following a similar pattern, but being a new species in a state I wasn’t familiar with still resulted in a slight case of the jitters.  Oh, and my voice of reason, Linda, wasn’t around so no help if I did something stupid – you know, like decide  to put a phone a few inches from it trying to get a picture – for the blog of course.  What I would later find out, thanks to a bit of researching, this might fall under “something stupid”. 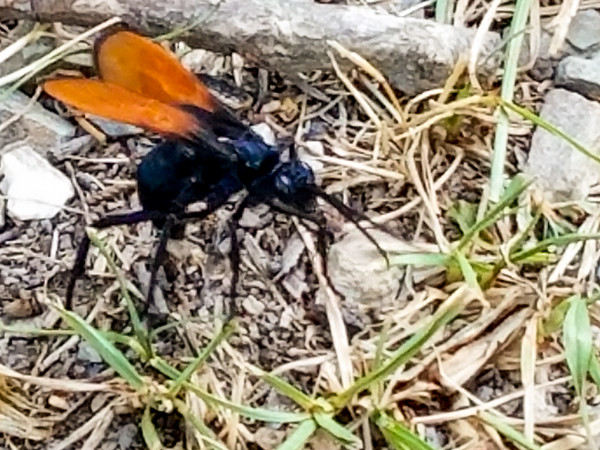 It didn’t take long to figure out what this new creature was – a quick Google search of orange winged Wasp and you learn this is referred to as a Spider Wasp   if that doesn’t make your heart skip a beat it is also referred to as a Tarantula Hawk Wasp – quick, get the defib.  There I was, about 6 inches away trying to get a picture of something called a Tarantula Hawk.  Where the hell is Linda when you need her. Note, one of the reasons the shots are so bad is it wouldn’t stop moving.  So a bit of research was done on this interestingly named Wasp.  Check this out, these Wasps get their name thanks to their breeding behavior.  They are known to find Tarantulas and engage in a deadly duel that usually ends in the Wasp’s favor and very very very very bad news for the Tarantula.  Wait, I think I am a couple of “very’s” short – you decide. The Wasp targets key points on the Tarantula such as the underside or in the leg joints. It is there they bring the full wrath of their up to 7mm stinger paralyzing the victim.  From there, the Wasp will drag the now paralyzed prey back to a crevice or even the Spider’s nest and lay and egg on it (should have probably pointed out this is the behavior of the female since the stinger is really a morph from their egg laying anatomy).  The mother will then cover the hole and go about their business.  In a few days, the egg will hatch, and burrow into the still living Tarantula and start eating it from the inside leaving the main organs until last to extend the life of the host.  Yes, definitely short a few “very’s”  holy crap, that is one evil Wasp. 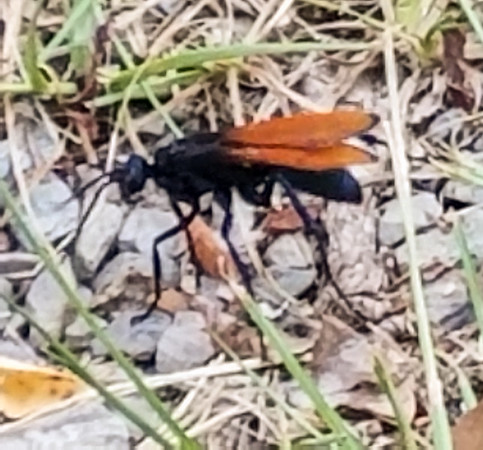 Now for the extremely concerning part about this Wasp – according to the research, these spider killers possess one of the most painful stings on the planet.  This is when I learned all about Justin Schmidt who created the sting pain index.  I likened it to the smiley face scale at your local doctor’s office, although hoping this pain index is more helpful than those stupid faces that are nearly impossible to choose from beyond the extremes – either I’m smiling or I’m #$%@#$%^ likely the latter being the fact you ARE AT THE DOCTORS.  I digress.  The top of the Schmidt pain scale is something called a Bullet Ant.  Wanna guess what is not too far behind that – say it with me “Tarantula Hawk”.  This sting is supposedly so bad that multiple reference sites recommended simply dropping to the ground and screaming – this way you will not cause further harm to yourself as you run blindly around trying to find someone willing to knock you out cold.  Unlike the Bullet Ant whose pain will last up to 24 hours, the Spider Wasp only lasts 5 to 7 minutes.  Did I mention yet I was less than six inches from this demon spawn!?!. 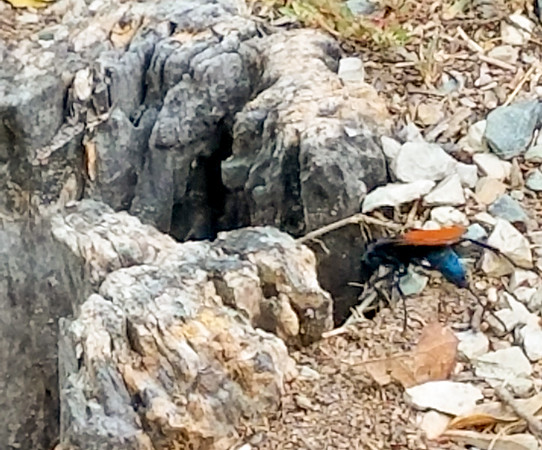 It did make me feel a bit better when I read these Wasps are extremely docile to humans only engaging when they are in serious harm.  Talk about flying softly with a big stick.  It also looks like this might have been a male specimen and not a female based on the fact the antennae were not curled.  Apparently that is one distinguishing characteristic between the sexes.

Out of crappy pictures, so better get this wrapped up and get to work on the new Halloween Haunted Trail decorations.  I’ll definitely be more careful in the future… or maybe not ha.

2 comments on “Stop, Drop and Scream”