So there are some posts that whip out pretty quickly.  Image processing goes fast, getting them uploaded to Smug an added to the post goes seamless and the words flow through the fingers effortlessly. Then there are the posts that seem to take FOREVER.  This posts happens to be one of the ladder thanks to a multitude of image sources ranging from my cell phone, the real camera and Facebook (thanks to a race photographer).  For a while there, didn’t think I was ever going to get this post completed.  Not wanting to go past 4 races behind, decided it was time to hunker down and do this…so here we go. 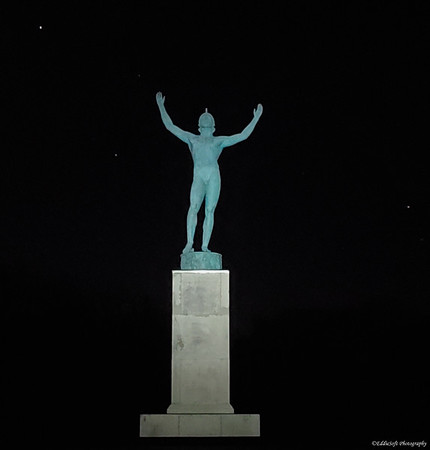 Now, if you had the opportunity to attend the University of Illinois (Champaign-Urbana of course) or simply like strange parks in the heart of Illinois, then you probably recognized the statue above.  If not, then I should mention that is the Sun Singer statue located at Allerton Park.  If you enjoy odd and eclectic this is the place for you.  You can see some of the artwork that is scattered throughout the1,517 acre park from my previous posts (link here and here).   Oddly enough, neither of those posts featured the Sun Singer which is definitely the signature piece when you think of Allerton.   The picture doesn’t relay the true size of the Greek sun god Apollo which is a 16′ statue sitting on a three tier pedestal (clipped out in my shot).  More on that later, because right now we have to get to the meat of the feature. 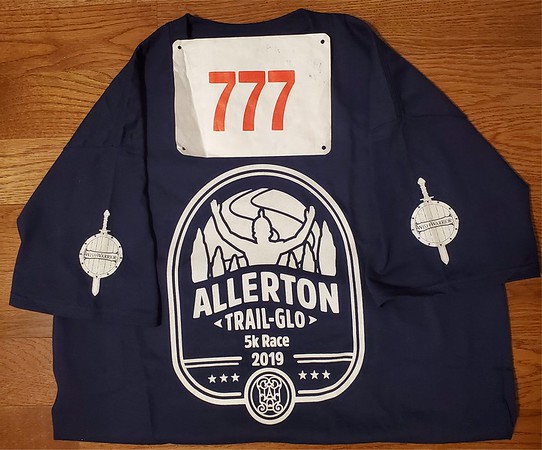 Hit the jump to read and see some recollections from the race!

Yep, the 2019 race season officially kicked off on April 12th.  The last 4+ years the Illini race at the end of the month was the start of the season – time to step it up this season and lead with a double trail race.  Thanks to a decision last year to take a different direction in my running pastime, I have now fallen completely in love with trail running.  After 16 years of pounding the road, decided I needed a new challenge and trails through the woods ended up being the perfect solution.  A friend of mine  (Ryan) had previously run the half at Allerton and enjoyed it.  Schedules worked out this year and next thing I knew I was signed up for the double race weekend – the Trail-Glo 5K on Friday at 8:00pm and then the Trail Half the next day at 9:00am.  There were concerns regarding the weather.  The Illini race was two weeks later and that race is always cold, wet and windy – for all I knew it was going to be snowing!

Sure enough, the weekend was predicted to be, well… cold, wet and windy – inconvenient for road race, a bit dicey when it comes to trail racing. Most of that week had its share of downpours and the weather was bouncing between cold and downright cold.   Adding to this, we had reached out to the race director and he had no issues with us staying overnight in the park in our RV saving us the hassles of reserving a campsite for the few hours between the end of the 5K and the morning half.  During Linda’s communications with the director (Dean) the topic of Linda helping out on the course came up.  She quickly agreed since she was just going to be hanging out waiting for me anyway.  Dean needed a way to illuminate a transition point from the road to the trails which was easily done thanks to the RV (Dean was extremely appreciative for the extra help) and Linda was able to successfully get all the participants headed in the right direction. 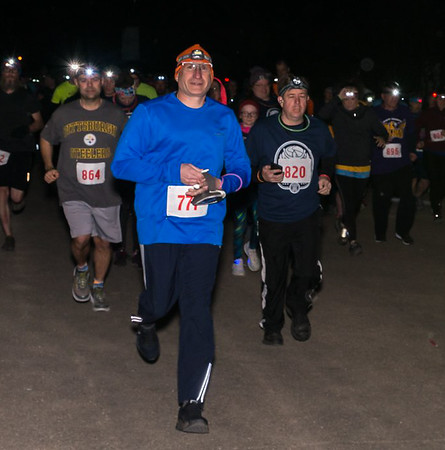 Although it was surprisingly warm during the day, it did get quite a bit colder as the sun set on the Friday race start time.  This required a couple of layers of clothing as I prefer to run a bit warm especially with the big race the following morning, wanted to take every precaution to prevent leg cramps.  Thankfully, the rain didn’t materialize and the wind was quite bearable – score!  With Linda in position, it was time to start the race.  The race was title a trail race, but in reality, the first half was really out and half way back on the road to the Sun Singer statue.  Dean mentioned that the road was probably more treacherous than the trail portion thanks to a multitude of potholes – he wasn’t kidding.  You were risking serious injury if you chose to run without a headlight.

For most of the race I kept myself at a comfortable pace almost forcing myself to hold back.  This was not the time to do something stupid and put the half in jeopardy.  That was easier to do on the road, the trail was a bit different as that is inherently more difficult than pavement.  Now I had to worry about missed roots and hidden holes.  Like night snowboarding, the artificial light tends to make everything look very flat.  Sure enough, a couple bad foot placements tested the ankle strength which held strong.  The surprise jolt of the night came while running in a valley before climbing the large hill that lead to the finish line.  Feeling good, I found myself pushing it just a bit, which brought a huge surprise when I almost stopped dead in my tracks.  Water had pooled under the leaves leaving an extremely muddy section right in the middle of the trail – thank god my shoes stayed on.  Navigated to a higher path through the murk taking note of that for tomorrow.  Note, this was the number one thing overheard at the post race party – “Did you hit that mud patch!?!  Yes, yes I did.  Oh, I had to work to get to the point in the shot above – there was a long series of steps right before that.

The shot above is definitely not of me although I am envious of those long leg strides.  I grabbed this off of CTKnapp’s website – he was the race photographer and did a might find job dealing with the dark setting (my action shots above were taken by him).  Running in the dark in this park is spooky enough on its own, but this hedge section right the end totally creeped me out.  The course took us through a hedge maze bringing to mind the scenes in The Shining.  Had there been snow on the ground I probably would have stopped and  curled up in a ball out of absolute fear – seriously, it scared the crap out of me and thankful that the race didn’t require me to find my way out of that maze.

Once past the hedge of death, there was a short section past the visitor center and then the finish line.  Legs felt good although I could have probably went with less layers as the temperatures held steady.  A 25:57 is definitely slow for my standard 5K, but it was a definite surprise to see I came in first in my age group.  No medals for the 5K so no hardware to bring home for that effort.  Regardless, one fun race.

The Allerton 5K and Half is charity event supporting Allerton Park and the Make A Wish Foundation.  During signup up they gave the option to provide an extra donation and if you gave at least $10 they added an extra logo to your race shirt.  You can see those on the race shirt shot earlier in the post – they added Make A Wish emblems on the sleeves – super cool.  Not sure how much each race contributed to the overall amount, but the two races combined raised more than $80,000 for the Make A Wish Foundation.  Fantastic. 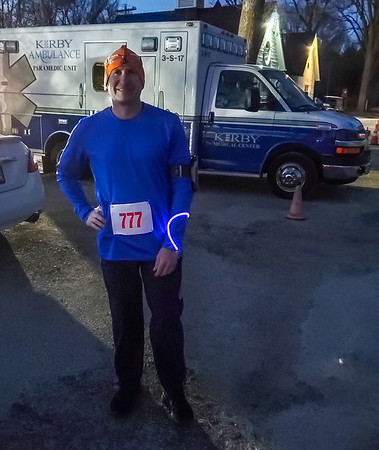 I was also surprise (and Linda very pleased) to see medical care available for the race.  One thing noted from the previous trail runs is a lack of ambulances and other formal medical facilities.  Guess they figure if you go down in the woods you are probably a gonner anyways (shhhhhh, don’t tell Linda).  Since there was one there, seemed fitting to get the traditional post race shot.

One of the statues at the finish line.  Difficult shot with just the standard cell phone.  Seeing the various statues lit up around the course while we were running added to the mystique of the place.  Now back to the Sun Singer topic that started this post.  Dean mentioned we would be the first people to ever stay in an RV at the Sun Singer clearing.  That sounded like a fun adventure.. until we went there after the race.  It was extremely dark and the statue lights were turned off.  By then the sky was clear and the half moon was shining bright.  Spent some time taking a few shots with the help of a tactical flashlight and my cell phone that I personally think came out awesome.  Once done with that, Linda and I debated whether we really wanted to stay there – something about rolling over in bed and seeing a giant god looking down on you felt a bit eerie.  Instead we opted to go back to the trail head Linda was stationed at.  It had a nice pull-off and more importantly, a porta-potty near it. 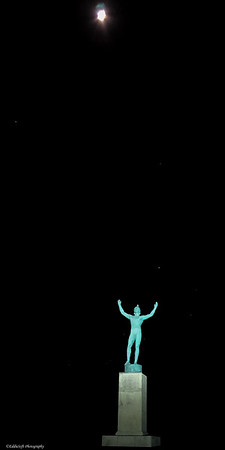 For one special night, the Sun Singer transformed into the Moon Singer.  Can’t wait until next year’s race.  Already confirmed with Dean we can stay there again and Linda did such a great job he hopes she will help out again next year.  That’s a wrap folks.  Hope you enjoyed the first race of 2019.