In case you are tired of Halloween posts, figured it would be a good time to throw in something different.  Don’t get me wrong, you have more posts coming about our Halloween Haunted Trail than examples of corrupt establishment career politicians coming out of Wikileaks on a daily basis – well, maybe not that many, but I had no idea how bad our representatives had become.  To help temper my disgust on this topic, let’s focus on a topic that always brings a smile to my face – a new check mark in my North American Birding List!

This fine specimen is what they call a Roseate Spoonbill.  I led with this image because it can be a bit deceptive when viewed from this angle.  If you are not familiar with this particular bird, you might not suspect that it has Spoonbill in its name.  In fact you might just think it was a Flamingo that saved up enough money to get that giant curve taken out of its bill.  Now, if you were to see it from a different angle, you would have no problem in the identification process.  An angle more like this one would definitely do the trick. 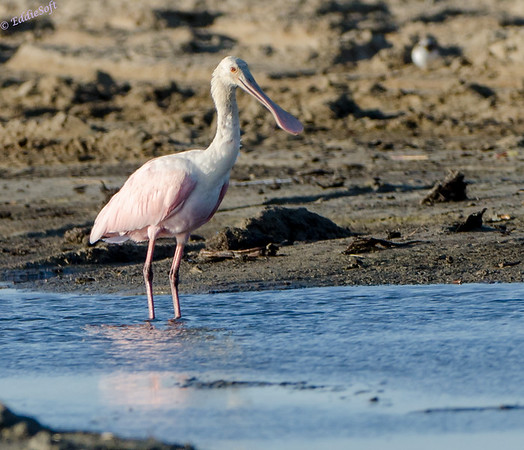 Now that is a schnoz. For some strange reason I have an affinity for this pink hued beauty – not sure why, maybe it’s the cool feet hehehe.  This particular Spoonbill was shot on the Texas cost in Galveston.  We took a birding trip down there back in November to capture the very rare Whooping Crane in the wild (link here).

Hit the jump to see a read a bit more about the Roseate.

With that bird in the tin, anything else we found while out there was just bonus material.  Having processed most of the trip shots now – hey, I’m technically still under the three year window – anyway, having processed a ton of pictures, I can definitely say that trip was a HUGE success.  You will be seeing a lot of posts coming from that trip now and likely through the candy cane season.

Now, the Spoon doesn’t really have that big of a range in North America.  Basically they tend to hang out in South America and on the Texas and Florida Gulf coastlines.  I actually had a bad shot of one from my Ft Myers, Florida trip, but knew I had these in the tin so waited to take the check mark until now.  I actually really like the next shot because it gives a good view of the paddles this bird possesses.

This was the first bird we shot on our Texas birding trip.  We had just pulled into the Galveston beach area when we spotted this bird hanging out in some puddles in the sand.  Not sure if their food source ended up getting stranded in these ponds from the tides or if these puddles were always there and it was more of a draw than an accident.  Either way, this Spoonbill and a bunch of other Peeps were hanging out here and they all seemed to be feasting.  I left the Peeps for another post along with the combo pictures – mainly to buy me some time to figure out what those are – little harder to ID than the paddle bill.

Let’s see what we can learn about this intriguing birds.  First off, their pink hue lead unfamiliar Floridians to believe they have seen a Flamingo.  I’ll blame Common Core for creating this problem.  Stop wasting time with the ridiculous new long division method and spend the extra time you will save to introduce the students to the world around them.  Cornell’s website indicates they eat fish, but also mention they strain food through their bill – seems like fish may be a bit of an exaggeration or they also take sustenance from very small marine life creatures.  Hmmmm – what else … they nest in trees – okay.. where’s the meat!?!  That’s the sum total of what they have on this bird – pretty craptastic for such a cool bird. 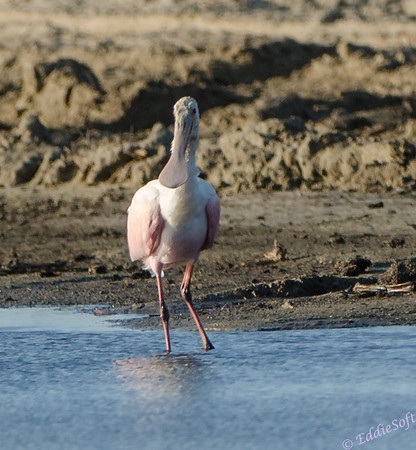 At least our friends over at Wikipedia inform us that that are part of the Ibis family (hmmm wonder if I happen to have one of those in the queue hmmmm).  Their chicks are born blind and with a short straight bill – they develop the spoon shape as they mature.  Not much else there either.  Okay, definitely need less long division and more Spoonbill research.

Seems I am out of pictures so I’ll put a check in my list and put a bow on this post.  Hope you enjoyed seeing my shots of the Spoonbill