I’m going to break from tradition of FIFO for a bit and execute a LIFO on my photography queue.  My brother is becoming quite the birding competitor requiring me to step up my game on the bird list front.  In the face of this stiff competition I’m forced to break from protocol and feature a recent addition to the North American Bird List Collection This beautiful duck was shot in Washington Park in Springfield IL.  I was down there dealing with some family medical concerns and had the chance to head over to that park for a quick 10 mile training run.  Turns out the rolling hills in that park seemed to have grown in size since my last trips there as a kid.  By the time the 9th mile came the legs were considering an all out rebellion.  The last mile became a quest to find a distraction sufficient enough overcome the loud screams of torture at each footfall.  Opportunity knocks at the most interesting of times.

While crossing over a bridge I noticed a crap load of ducks and allies enjoying a small ice free area of a large frozen pond.  In the brief time they were in view it appeared that the occupants were predominantly Mallards and Canada Geese, but it looked like there were some outliers which are prime fodder for birders.  There was another mile to hammer out so unfortunately no time for a detailed scan. Hit the jump to see a few more shots of this ornate Duck.

Some free time came available the next day so jumped on the opportunity and headed back to Washington Park to see what I could find – Ron was busy racking up new species up in Chicago so the fingers were crossed!  The previous day’s temperature was in the low 30’s but sunny enough to make the run somewhat pleasant – the temperature dropped down to 10 for the return – eeesh.  No problems, just bundle up and keep the fingers warm until there’s something worth shooting.  It didn’t take long to find something worthy of getting the fingers cold.  If you haven’t seen this duck before or couldn’t figure it out from the post title, this featured specimen is a Wood Duck. This was definitely a surprise.  I might have a few shots of one from a Wisconsin trip last year but if I recall correctly (they have not been processed yet) those were nowhere as close as these.  My birding golden rule when it comes to waterfowl photography is always scan for outliers – look for the loners going about their business without regard to the social interaction of the local birds.  Those elusive birds are likely the rarer subjects and excellent sources of bird list checks.  That is exactly the situation here – away from all the tightly huddled Geese and Mallards, was  this lone Wood Duck.  The Wood is definitely in the upper echelon when it comes to colorful birds and their unique drooping crest make them an easy spot.  Admittedly I often mistake their name for Harlequins in the field but easily corrected after a quick flip through the reference books.

After shooting a few more interesting subjects at that pond I forced my frozen legs over to another pond that I saw while running the previous day.  The loner birding rule didn’t apply to this pond – the Wood ducks were mixed in the middle of another densely populated Mallard congregation.  This group offered up something the other pond didn’t – the FEMALE Wood duck! Although not as colorful as their male counterpart, the female does sport a very pleasing color palette as well.  They also do not sport the ornate hood.  The shot above cracks me up every time I see it – those Mallards had that female Wood duck locked up tight.

Here is better shot that shows the differences between the sexes (actually a two-for with the male and female Mallard specimens as well). Oh no, almost out of shots – better throw in some interesting facts.  The Wood Duck prefers to hang around … wait for it … in Wooded Swamps.  Once again the bird  discoverers really should be ashamed of their creativity.  Reminds me of a recent discussion with Ron about a new find he was offering up as a new species (that was quickly shot down) but in that discussion I suggested he name it “Fuzzy Goose” in recognition of the reference shot he had (ha).  According to Cornell’s excellent birding site, the Wood duck possesses unusually strong claws that allow it to grip bark and perch on branches.  If you get a chance head over to the Cornell site and check out their voice sample – it sounds like one of my dogs going to town on a squeak toy.  This was not witnessed in the field – all the specimens available stayed silent while on the shoot.  As mentioned, they nest in trees and regularly produce two broods a year. 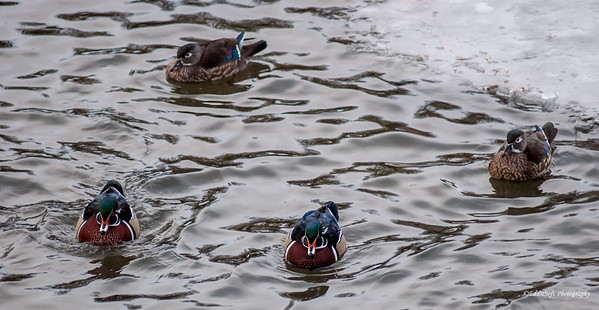 They are dabbling ducks and rely heavily on plants for food but can augment their food with acorns and such when food turns scarce.  All in all, a pretty cool duck in my opinion.

Well, that’s it for today.  All that is left to do is put a check in the bird list and get it added to my NA Bird Life List Gallery – yeah!

2 comments on “Got Wood”