Greetings everyone!  We are at the end of Summer now which translates to a mixture of sadness and stress.  Sadness in the sense that like every year I wonder where in the hell all the time went.  Each year my objectives list get longer and longer yet every year it seems like a huge struggle to get anywhere close to getting through the list.  It is this time of the year it really hits home because the finality of the limited number of days until Christmas is a blunt object trauma to the head.  The stress part comes knowing there is only one week left before our annual Halloween party.  The goal is to give our guests the best possible experience I can and by standards better than the year before.  Upping the game this year, we are adding more electronics into the show which means huge assistance from my EE/Physics/genius/cat friendly/birding brother Ron.  As I type he is busy building new heat sensors for my decorations.  While he is doing that, I am in a full throttle battle with my basement and other tasks that need to be completed before then.  It is really quite the epic battle every year to get all the decorations stuff done while getting the house prepped for guests.  A labor of love at a cost of sleep deprivation.  Add in this month’s blog quota and you have one groggy Bri.  That, however, has never been sufficient excuse to let my blog readers down so on to the meat.

Today’s featured feathered friend is the American Turkey.  Due to the time compression, pretty much locked into whatever images I already have processed.  Thank god I worked up a ton of shots from our Texas trip we took back in November 2013.  Hmmm 1, 2, holy crap I’m almost a solid three years behind now.  Cleansing breath, cleansing breath, breath in, breath out ahhhhh… much better.  Note, I find it quite amusing that Ron is now experiencing the joys of a backlog now that he has started his bird blogging (shhhhh don’t say anything, it’s my decoration work that is probably the cause of his delays).   I’ll give credit to Linda for spotting this specific group of Turkeys while driving in a park.  They were just meandering around enjoying the beautiful day like the rest of us 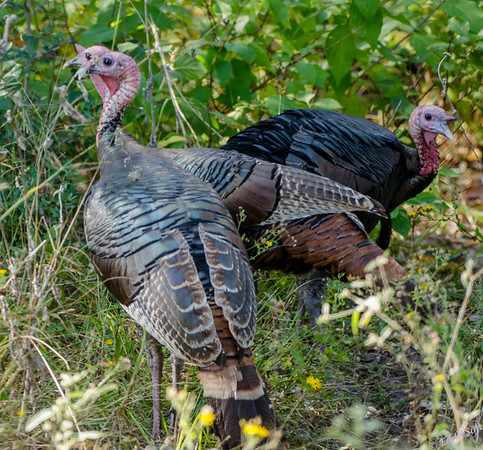 Hit the jump to see a few more pictures

The interesting trait I’ve noticed about these rather large birds is they never seem to get in that much of a hurry.  Every time I come upon them, they simply acknowledge my presence and continue walking around at their standard grazing pace.  They do keep their eye on me about the whole time, but that doesn’t stop them from moving in their intended direction. 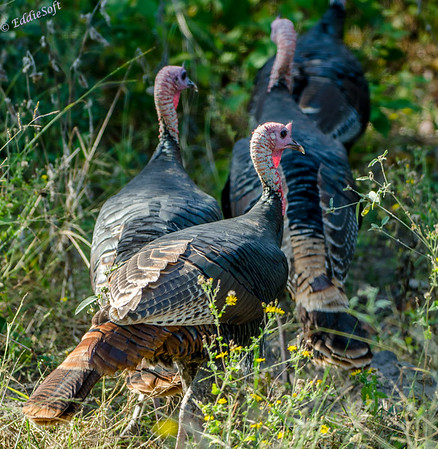 You can definitely tell this particular rafter of Turkeys were a bit concerned about having The Beast pointed at them.  Note, I had to look up what a group of Turkeys are called – there appears to be a discrepancy on what to refer to them as – a gobble, or a flock or as the correct term is a rafter.  No clue on how this came to be the reference for multiples but Cornell does mention they are capable of swimming if needed.  These birds along with the Muscovy Duck are the only two domesticated birds native to North America.  I can see the first American Indian and the early settlers saying “Look at the huge bird with the funny head … let’s kill it and eat it!”  Not to mention they are victims of being fairly crappy fliers making them soft targets for even the worst of shooters.  Now that we have intervened in their genetics, our domestic Turkeys are so fat they can’t even fly.  I’d feel bad if they were not so delicious. 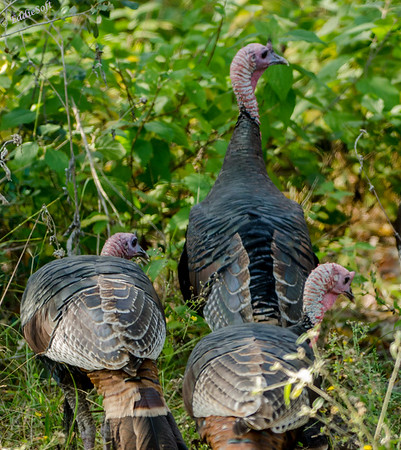 Once again, I’ve made it through my available images too quickly.  Some quick facts to close it out – The Toms (males) provided little care for their offspring.  The Hens nurture the young by themselves and based on what I learned from the person who built my house, they will move them around to different locations to keep the Tom from bringing harm to them – apparently they can get downright nasty to offspring.  Not confirmed by reference materials, just giving you what information I have in my pretty little head.  Oh, and we happen to know a lot about the historical aspects of this bird because they were domesticated – their bones have shown up in ancient artifact locations where they used them for food.  Their McDonalds sign should be “Feeding humans for millions of years”.

Well, better get back to the grind.  90% of the basement trim is completed now, time to start cleaning it up so we can start staging all the decorations.  By the way, I find enjoyment over teasing my brother with Turkey pictures – he has struggled to get them although  think he has them now.