I can safely say my body, at the moment, hasn’t been this sore since exactly one year ago today.  Ironically, it is really due to almost the exact same torture I put it through last year although this year was about 13.1 miles easier.  Yep, this is my anniversary of completing the Illini Marathon over in Champaign.  Like last year, I once again battled the running gods by accepting the I-Challenge, but Linda pretty much insisted I only did the half challenge – 5K Friday and then a half marathon Saturday morning.  I’ll leave the rest of the details for a future post, but there are three more medals to add to my wall… and legs that once again are screaming at me.  Since I’m sitting here waiting for the pain to subside, decided it would be a good time for a post so here goes.

Well, this particular post shouldn’t be too much of a surprise if you happened to read my previous post on the Great Horned Owlets.  You probably already guessed, their mother wasn’t very far away. 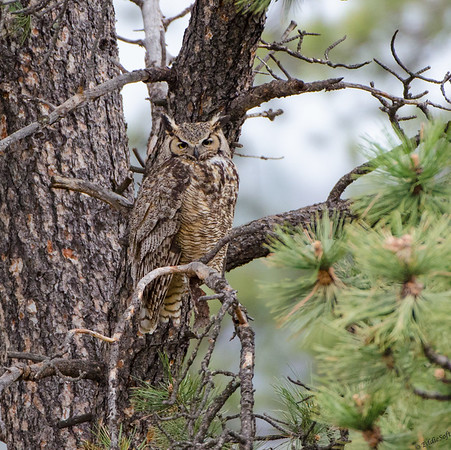 …. and you would be right!  She was actually just on the other side of the tree trunk hanging out on  a branch keeping a very close eye on any dangers that could threaten her cuties.  She was pretty calm about the whole thing.  Imagine a number of tourists driving up, pulling off to the side of the road, jumping out with all forms of cameras and then milling about under the very same tree her precious offspring are spending their days.

To her credit, she would check off all the dangers to her right… 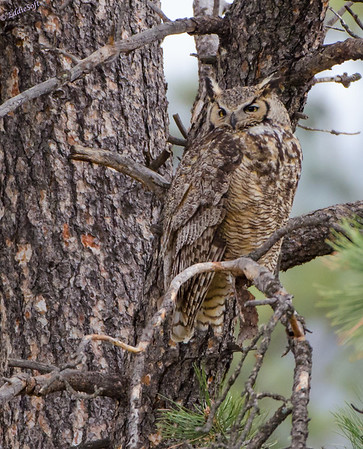 Hit the jump to see a few more pictures of Mommy!

… and then make sure all the threats were properly assessed in front of her – she took some extra cycles to figure out what that big black barrel thing was pointed directly at her.  Probably saw her reflection in the glass. 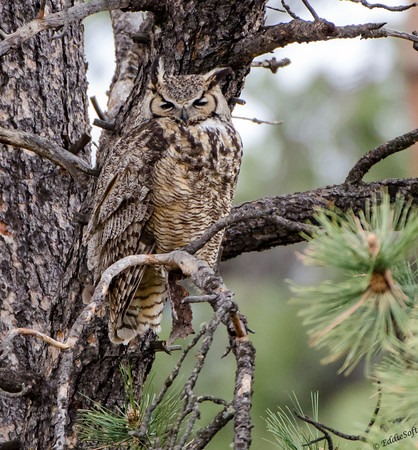 Leaving no vulnerability unchecked, she also kept her keen eyes on anything suspicious on her left.  To her credit, she kept her calm through it all.  Likely she had just become accustomed to all the activity down below, but then again, she is pretty much the king of the skies when it comes to death from above.  Owls are lethal and for those of you who might consider the Eagle as the top of the echelon – well these Owls will attack and kill them as well – the Wildlife Prairie Park resident Eagle was taken out by an aggressive Owl. 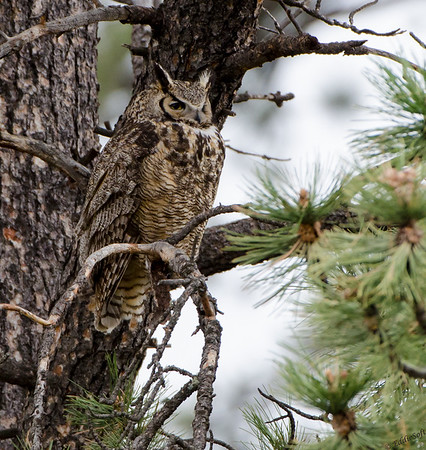 About the most I saw her get concerned was when she noticed something on the ground.  Suspect it was a possible food source popping its head out near the road but I did get to see how menacing these creatures can look when something interesting catches their eyes.  One look at that expression and I’d be popping my head back down the hole pronto!

I was kind of light on the bird facts on my last post, so let me see what I can find out about the Great Horned that might be interesting.  For starters, Cornell mentioned that they have a 28 pound talon closing force.  I can hear the spines of victims cracking from here.   Like in many of the predator birds, the female is larger than the male. The eyes are fixed in their socks, however they can turn their heads over 180 degrees giving them a full 360 view – bad news for the rambunctious Owlets, their mommy DOES have eyes on the back of their heads hehehe.  Their hearing is super sensitive thanks to feathers on their face that direct sound to their ears. 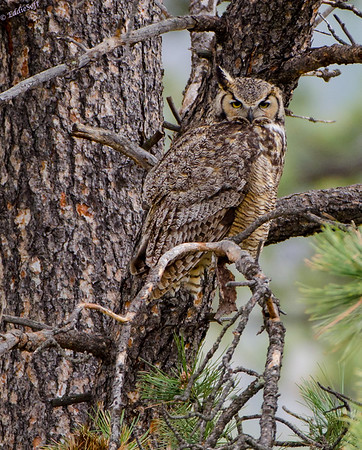 Odd that the Cornell site didn’t mention the fact their ears are on slightly different planes  improving their hearing as well (thanks to my brother Ron for enlightening me on that tidbit).

Not much else that really stuck out on the Owl facts.  One thing for sure, they are equipped to kill.  Pretty sure it was intentional, but I did get a look at those deadly talons.  “Hey you, yeah you over there taking pictures of my precious babies, just in case you get any ideas, here’s a good reason to keep your distance!” 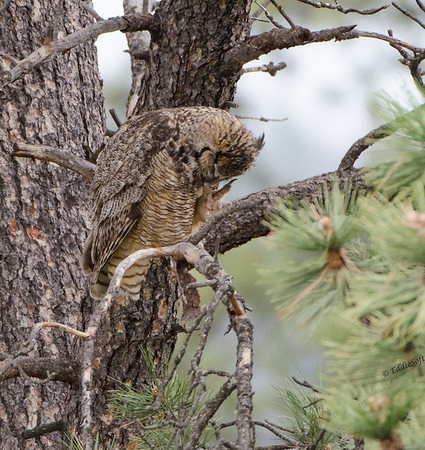 No worries to be had from me.  I was just there to witness one of the coolest birds there are and take a few shots to remember the experience … well, more like take A LOT of shots – probably filled up two full digital cards trying to get some decent shots I wouldn’t be embarrassed to show someone.  All in all, pretty happy with what I got – hope you enjoyed seeing a few shots of the Great Horned Owl – this time the adult form.  Now time to go find some Aleve –  legs are locked up good and tight now.

2 comments on “Don’t Worry, Mommy Has Her Eyes On You”