Greetings everyone!  Just sitting here outside my RV enjoying the sounds of joyful birds while enjoying a beautiful purple and pink sunset.  Of course, don’t let that fool you, It may be beautiful on the outside, but inside my body is undergoing some serious stress as we are camping at the starting line of tomorrow’s 50K.  Hard to say if I am even close to being ready for this, but if not, I only have myself to blame (shhhh, don’t tell Linda, I like to use her as my excuse … takes the edge off of failure ha!).  In an effort to quell the rising concern, thought I’d make a quick post from a previous race. 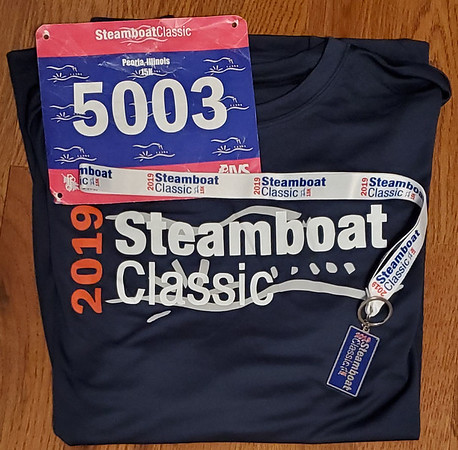 A couple of weeks ago they held the annual running of the Steamboat Classic in the Peoria area.  Basically a local race that just happens to be on the same training course my friends and I use throughout the year.  Well, for at least the difficult part, we do not bother with those wussy 2 mile flats into and then out of the monster hills – those are for those 4 milers that are not brave enough to head up into the hills for the full 15K

Hit the jump to read more about how the race went!

Maybe I should correct that … not brave enough to take on the hills of Illinois’ toughest 15K road race.  This year it has pretty much been raining nonstop which caused a course change.  Rather than two loops with the mega hill, they opted to make the hill trek longer and add a third loop to the course.  Ryan and I found out for ourselves the reason for the course change.  The local Zoo sits on top of the hill.  The Zoo poo is deposited halfway down the hill in an alcove off the edge of the road.  2 weeks prior to race day, Ryan and planned to take a few practice runs up the hill to see what kind of shape we were in.  All was good until we had to pass through a muddy, squishy area to get to the top.  EXCEPT THAT ENDED UP NOT BEING MUD!!!!!

Ours shoes ended up covered in poo that had washed down across the road from the hillside above it.  Wow, that was gross and we shall never speak of that incident again.  After that experience, we ended up taking the alternative, longer, route up the hill to avoid it.  That is the exact same route they changed the Steamboat route to except due to the resulting reduction in the course at the top they had to add the third traversal.  A LOT of people were complaining about that change which made me chuckle a bit as they were signing up for “The Toughest 15K in Illinois”, should they really be complaining if they made it a bit harder – me thinks not.  On the personal front, I ended up running close to 13 miles on that training day with Ryan which included 4 climbs of the hills so there were no worries there.  Note, I was trying to discretely take a picture of my running arch nemesis  that I noticed while lining up at the start and NOT an intentional picture of the young ladies ass – promise!  Turns out I will have to find another nemesis – the white haired one was only signed up for the 4 mile (I must have broke him hehehehe).   Oh, and honestly, I was taking a picture of the person on the OTHER side of the shorts.

And now for the traditional start of the race picture.  Happy, fresh, confident, not a concern in the world… as far as you know.  More importantly notice how dry I and individuals around me are.  Why point that out, at roughly the two mile mark, yes the point that starts you into the manly portion of the course, it started to rain, wait, not rain, rather absolutely pour buckets after buckets after buckets.  It felt like running through a pool.  Typically not a big fan of hard driving rain running as it make the shoes heavy and often leads to some nasty blisters as the socks start slipping in the shoes.  However, when it comes to Steamboat, a race that is well known for being a hot, humid nightmare of a run – it ended up being a welcome addition.  From that point on, just focused on the road and got down to business.  Unfortunately there was a serious distraction that kept impeding my concentration – another one of those Cross-fit junkies ended up once again driving me nuts for nearly the entire race.  As I started up the hill a young lady goes flying past me – kind of odd for starting a hill, but to each her own.  I use a steady pace approach that doesn’t go up or down for the duration of the hill – rock steady.  Eventually Miss CF stops right in my lane and starts walking some distance ahead forcing me to divert around her until near the top when low and behold she goes flying by me again.  Eventually she stops in my lane, I pass her and repeat the scenario for the whole damn race.  I have no problem if this is how you want to run the race, but pick a lane that doesn’t impede others that prefer to run the entire race.  Time to get off my soapbox – sorry about that, guess we should just be glad they are off the coach.

The downpour of rain lasted until about a half mile from the finish.  I was soaked to the bone, but extremely glad the body was in still feeling good especially with prime directive of this race was to “take it easy and NOT get hurt prior to the 50K – Holy Crap I’m running a 50K tomorrow!!!  Sorry, back to the previous race.  Things were going great and there was plenty of gas left in the tank.  That’s when I spotted the dude that had passed me around mile 7 – that would be the dude in red.  I must admit, was a bit surprised myself when it happened.  Had about 4 tenths to go on a down slope to the finish so started letting the dogs run a bit.  Came up alongside the guy in blue to my right who turned and congratulated me on a great job.   I replied similarly, noticed he had probably turned it on a bit early and was suffering for it.  Went back to gauge the distance between the dude in red and the finish – decided to push it harder. Note Miss CF is in white in the back far left.

Need to dig a little deeper if I’m going to pull this off… hmmm, what was that prime directive thingy…. Oh hell, one more final push should do it.

Goal accomplished.  Kudos to the guy in blue who was battling through it as well.

Not complaints about this race.  After a quick cool down, did an inventory check and all the pieces seemed to be functioning just fine.  Not often you get the chance to run Steamboat and be feeling good about it at the end.  Mother Nature can rain all it wants to at that race from here on out.  Now the two lightning strikes that happened at mile 5 and 7 were a bit concerning and thankfully not persistent enough to call the race – now that would have sucked – almost like the last three days of downpours prior to my …holy crap I entered a 50K trail run tomorrow and it has been raining steady all week – what the hell was I thinking.

There was one screw up at the race – at the end I was so drenched from the downpour I just wanted to get home and put on some dry clothes.  In the rush we forget to get the traditional post race shot next to the ambulance.  I shall blame my personal photographer – see how that works!?! Feels great to be able to pass the blame.   Oh, and look I’m wearing the race shirt from last year’s Cry Me a River race which happens to be the same race event as tomorrow’s 50K (except last year’s I wussed out and only entered the half marathon version.

Felt really good with the splits.  I don’t think this is my fastest Steamboat 15K, but not too shabby knowing I was trying to stay in control for most of it.  Ended up 8th in my age group – no threat of placing, my good friend at work smoked me with a 1:11 and came in 3rd.

Here is the official race certificate.

I must say, really happy with the results and more importantly glad nothing got damaged.  Can’t say the same for tomorrow’s expectations as the forecast looks like more rain and nasty levels of humidity.  Nothing like a good challenge to let you know you are still alive.  Take it easy everyone, hope to see you on the other side of Saturday.